Raising the Dead for Bad Reasons 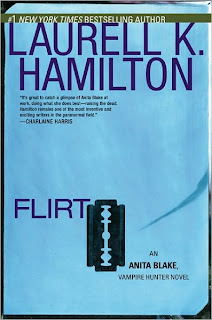 “I’ve earned my reputation, but if you really did your research on me then you also know that I don’t raise zombies for kicks, or thrill seekers, or tormented relatives unless they have a plan.”

When Anita Blake meets with prospective client Tony Bennington, who is desperate to have her reanimate his recently deceased wife, she is full of sympathy of his loss. Anita knows something about love, and she knows everything about loss. But what she also knows, though Tony Bennington seems unwilling to be convinced, is that the thing she can do as a necromancer isn’t the miracle he thinks he needs. The creature that Anita could coerce to step out of the late Mrs. Bennington’s grave would not be the lovely Mrs. Bennington. Not really. And not for long.

Anita has been relaxing just a bit with the men in her own life. The affectionate warmth of being with them brings out something softer in her, a sense of safety she can almost trust. They do love her; that part is forever and for sure. But flirting with feeling safe is a dangerous thing…

The eighteenth book and second shortest book (Micah is the shortest) in her Anita Blake series, Laurell K. Hamilton goes back to the root of what made this series so popular with Flirt. A lot of flirting happens in this book- hence the title- some casual, some not-so-casual, and some that can be downright deadly. With no zombie raisings for the last couple of books, it’s great to see Anita back to doing what she does best, raising the dead. However, she finds out fairly quickly that it’s not too much safer than any of her other work, especially with her having so many men in her life that can be

Ms. Hamilton said that Flirt was inspired by an incident with friends at a diner. She and her husband went to a party at a friend’s house that she had to fly to (like Anita, Ms. Hamilton is afraid of flying) and met the writer for The Devil’s Panties. Ms. Hamilton said she realized that “here were two artists experiencing the same weekend, but taking entirely different things away from it.” While Jennie Breeden (the webcomic author) seemed to walk through a world that was “brighter, happier, even funnier,” Hamilton experienced a version that was “darker, more overtly sexual, even aberrant, violent, sometimes violently sexy, and an innocent moment turned into a potential for murder and horror in [her] head.” Ms. Hamilton claimed that this was an eye-opening experience and helped her lighten up somewhat so that when she was out to lunch with the same friends later on (without Breeden), the scene in the book in the diner with the waiter, Nathaniel, and Anita occurred in real life. She said as she was leaving, “If Jennie were here she’d turn this into a funny, charming comic strip, but if I ever used it as an idea, it would all go horribly wrong. There would be violence, or violent sex, or both, and a high body count.” Well, it didn’t go wrong but it did lead to those things eventually and this one incident was what inspired her to write Flirt.

Again, like Skin Trade, this book is more plot driven than the last two books and less about the sex, however because Anita is practically a succubus now it does crop up. I found it interesting because Flirt seems more like the earlier books in this series which I’ve always loved (the later ones are good but I tend to not enjoy those as much) but Anita does collect a new man in this book, he’s a werelion. Not sure how that will effect Haven (Cookie Monster) yet. I really like him but it doesn’t seem like Anita does very much. There are actually no vampires in this one but of course, the

y are mentioned however, it was very refreshing to not have an Anita Blake story that wasn’t cluttered with all of her men.

This was a fairly quick read that the author wrote at the same time as one of her Merry books Divine Misdemeanors. Though the next book Bullet was released on months after this one, there is a year between them so we’ll see how well everyone has adjusted to everything by then. So in Flirt there are "new bad guys, new werelions, romance, flirting, fighting, sex, violence, preternatural psychics, and zombies." We also learn just how far will Anita go to save herself and those she loves in this book. Sometimes I think this series has gone on long enough and then Ms. Hamilton pulls something like Flirt out of her hat and it renews my faith in her and her lovely characters.

Note: A short comic strip appears in the back Flirt by the writer Jennie Breeden for the webcomic The Devil’s Panties illustrating the inspiration scene mentioned above.

“If I could raise her from the dead for real for you, maybe I would. I won’t debate the whole religious/philosophical problem with you, but the truth is that even I can’t do what you want. I raise zombies, Mr. Bennington, and that is not the same thing as resurrection of the dead. I’m good, maybe the best there is in the business, but I’m not that good. No one is.”

Seemed this was my week for people wanting my very “alive” zombies for very bad purposes.

I was remembering why I didn’t flirt for fun-- because I didn’t know how. I could flirt with intent of dating or sex, but I sucked at casual flirting. Shit.

Hope was a bad friend when men with guns have you. But my lioness and their lions lusted after each other, sort of. Lust I trusted. Hope will lie to you, but lust is what it is; it never lies. Hope would keep me hoping, but lust might be a weapon I could use to divide them. Divide and conquer has been a strategy for thousands of years; there’s a reason for that.

“I watched them comfort you, and then watched you flirt with the waiter. You wouldn’t give me back my flirt, so I took yours, and if you take my Ilsa away from me again, I will take your men away from you forever.”

First Paragraph: “I want you to raise my wife from the dead, Ms. Blake,” Tony Bennington said, in a voice that matched the expensive suit and the flash of the Rolex on his right wrist. It probably meant he was a lefty. Not that his handedness mattered, but you learn to notice primary hands when people try to kill you on a semiregular basis.


Source: My personal collection, special thanks to Zoe Reads

Picture Explanations
Cemetary: Like in The Laughing Corpse, Anita ends up in a cemetery
Lion: Quite a few werelions in this one!
Posted by Ladytink_534 at 1:24 PM