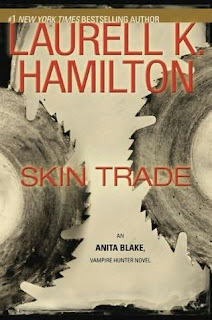 Once you tell someone certain things—say, you got mailed a human head in a box—they tend to think you're crazy.

Anita Blake's reputation has taken some hits. Not on the work front, where she has the highest kill count of all the legal vampire executioners in the country, but on the personal front. No one seems to trust a woman who sleeps with the monsters. Still, when a vampire serial killer sends her a head from Las Vegas, Anita has to warn Sin City's local authorities what they're dealing with. Only it's worse than she thought. Police officers and one executioner have been slain—paranormal style...

Anita heads to Las Vegas, where she's joined by three other U. S. Marshals, including the ruthless Edward hiding behind his mild-mannered persona. It's a good thing Edward always has her back because when she gets close t to the bodies, Anita senses "tiger" too strongly to ignore it. The weretigers are very powerful in Las Vegas, which means the odds of her rubbing someone important the wrong way just got a lot higher...

In an interview, Laurell K. Hamilton said that the seventeenth book in her Anita Blake series Skin Trade was one of the hardest books she wrote for this series for various reasons but mainly because she had to scramble to do the research she usually does for the books. For example, there's a morgue scene in Las Vegas with Olaf and Anita yet Ms. Hamilton hadn't visited a morgue in ten years and many things had changed. The bad guy from Incubus Dreams is back i

n this book and we finally get to meet him instead of just his minions. Oh and Anita has moved into the Circus with Jean-Claude and all her other lovers but it’s becoming a strain on everybody so this little “vacation” to Las Vegas to hunt the serial killer is just what the doctor ordered: ‘If I hadn’t been convinced that Vittorio wanted to kill me and mail my head somewhere, I’d have looked forward to the trip to Vegas. I needed some distance between me and the men in my life.’

While I haven’t been overly disappointed like some of the fans of this series, I have to admit that this was the first book that I didn’t buy and read as soon as it came out. I’ve heard for awhile now that it has some of the flavoring of the earlier Anita Blake books that we all loved and it kind of did. However, there was just something about this that screamed, “trying too hard” at times. My main problem was just how almost soft that Edward has gotten (Hamilton has said that she thinks that now that he‘s a family man he‘s more dangerous but I just didn‘t see it

here). There still isn’t a sexual vibe between Anita and him thank goodness but he’s not quite as cold blooded as he used to be. Don’t even get me started on how creepy Olaf trying to be somewhat normal for Anita is either. I did like Vegas’ SWAT team, of which most had some kind of powers. One even feeds off of memories like Anita feeds off of sex.

Anita Blake has always worried about becoming one of the monsters and now she practically is one. However, she’s not evil and because of Wicked and Truth (two vampire warriors that she blood -oathed in The Harlequin) she now has a fail safe in place if she ever becomes that way. Anita has faced a lot of incredibly scary things in the previous books but Olaf is the only one besides Marmee Noir that really scares me. Speaking of which, Hamilton finally lets us know what Marmee Noir wants with Anita in Skin Trade.

Though Edward and even Olaf have appeared in other books, Skin Trade is more like Obsidian Butterfly than any other (Bernardo Spotted-Horse even comes back for this one). Well, Olaf is a Marshal now too… but he’s still a serial killer. Just one that plays with vampires now. Of course

it has been three years according to the series since Olaf, Bernando, and Anita first met (nine since that book was actually published though). Unlike in Obsidian Butterfly, Anita now has the ardeur to contend with and ends up having to bring her own “snacks” and bodyguards which includes everyone from Wicked, Truth, and Requiem, to wereanimals like Haven (Cookie Monster) etc, though they seem like more of an afterthought, besides the vampires which have important roles. I’m truly impressed with how long Ms. Hamilton held out on having sex in this story since most of her books past Narcissus in Chains are more sex than plot driven. From all of my complaints it does seem like I didn’t like Skin Trade when I actually did. I thought it was one of the stronger books that have been published in recent years and I look forward to seeing where the author will take her characters next.

Of course, there were people who said that I was a serial killer. I still had the highest kill count of all the legal vampire executioners in the United States. I’d topped a hundred this year. Did it really matter that I didn’t enjoy my kills? Did it really change anything that I took no sexual pleasure from it? Did it matter that in the beginning I’d thrown up? Did the fact that I’d had an order of execution for most of my kills make them better, less brutal? There were serial killers who had used only poison, which caused almost no pain; they’d been less brutal than me. Lately, I’d begun to wonder exactly what set me apart from people like Vittorio. I’d begun to question if to my oh-so-legal victims it mattered what my motives were.
A woman answered the phone in Las Vegas, and I began the process of getting passed up the line to the person who might be able to tell me whose head I had in the box.

Without talking to each other, or even looking at each other, the four of us formed points of a square to watch the room. I made sure my point was watching the coming tigers, but we all knew our jobs. I might have issues with Olaf, and even Bernardo, but it was nice to work with people who knew how to deal. We covered the room, not like cops but more like soldiers. No, we covered the room like people who were used to pulling guns and shooting first. None of us were really cops. Cops save lives; we took them. Four executioners standing in a room; best to be elsewhere.

I sat in the back of the squad car musing on what it meant to have a badge when your job description hadn’t changed. We were assassins. Legal, government-sanctioned assassins. Some of us tried to be good marshals, but in the end, the other marshals saved lives, and all we did was take them. In the end, all the badges in the world didn’t change what we were and what we did.

First Paragraph: I'd worked my share of serial killer cases, but none of the killers had ever mailed me a human head. That was new. I looked down at the head, ghostly, through the plastic bag it was wrapped in. It sat on my desk, on top of the desk blotter, like hundreds of other packages that had been delivered to Animators Inc., where our motto was Where the Living Raise the Dead for a Killing. The head had been packed in ice, for all the world like some employee of the postal service had done it. Maybe they had; vampires can be very persuasive, and it was a vampire who had sent the package. A vampire names Vittorio. He'd included a letter with my name written on the envelope in lovely calligraphy: Anita Blake. He wanted me to know who to thank for my little surprise. He and his people had slaughtered over ten people in St. Louis alone before he fled to parts unknown. Well, not unknown now, maybe. There was a return address on the package. It had been mailed from Las Vegas, Nevada.


Picture Explanations
Tiger: There are a lot of weretigers in this book and that’s in addition to all the colors of the rainbow of tiger that Anita carries inside herself.
Las Vegas: Where the book is set at and Anita gets to see it like this when one of her vampires flies her somewhere.
Cops: Anita gets to play with out of state cops. None of whom are fun to be around besides the special unit.
Posted by Ladytink_534 at 1:28 AM