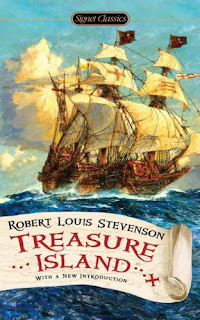 The most popular pirate story ever written in English, featuring one of literature's most beloved "bad guys," Treasure Island has been happily devoured by several generations of boys, girls, and grownups. Its unforgettable characters include: young Jim Hawkins, who finds himself owner of a map to Treasure Island, where the fabled pirate booty is buried; honest Captain Smollett, heroic Dr. Livesey, and the good-hearted but obtuse Squire Trelawney, who help Jim on his quest for the treasure; the frightening Blind Pew, double-dealing Israel Hands, and seemingly mad Ben Gunn, buccaneers of varying shades of menace; and, of course, garrulous, affable, ambiguous Long John Silver, who is one moment a friendly, laughing, one-legged sea-cook . . . and the next a dangerous pirate leader!

The unexpected and complex relationship that develops between Silver and Jim helps transform what seems at first to be a simple, rip-roaring adventure story into a deeply moving study of a boy's growth into manhood, as he learns hard lessons about friendship, loyalty, courage, honor, and the uncertain meaning of good and evil. 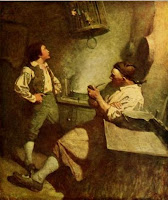 Pirates have long been the celebrated rogues of literature and film but it wasn’t until a struggling writer named Robert Louis Stevenson published his first truly successful work called Treasure Island that the scallywags became forever linked with boy’s adventures. Especially pirates that have one leg with a parrot perched on their shoulder and of course treasure searches…

This author’s most popular works like Treasure Island and Dr. Jekyll & Mr. Hyde are firmly embedded into pop culture so I have seen some

his works adapted to film (and sometimes parodied as well in cartoons and such). However, my favorite of the two stories is Treasure Island, mainly in part thanks to Disney's 1950 release starring Robert Newton and Bobby Driscoll. I was a little worried that maybe Disney had strayed from the original story but I needn’t have at all. The entire time I read about Jim’s adventure, I couldn’t help but picture characters and places from the film (there were a few deviations of course) and it was such a wonderful escapade too!

the only thing I have ever read by Stevenson was some of his children poetry when I was younger. As you may have already guessed, I just love books that have been made into movies and vice-versa too. Classics like Robert Louis Stevenson’s Treasure Island on the other hand, not

only have been made into films like Disney’s Treasure Island and Treasure Planet or the Jim Henson take on it with Muppet Treasure Island but also there have been TV shows and even cartoons. Anything that has over 40 adaptations (not counting famous plays, books, etc.), with the earliest known of in 1912 and many of which are in foreign languages, is definitely worth reading!

There is a very good reason that although now 125 years old, the book is still remembered, read, and loved by people the whole world over. However, I believe I’ll let Robert Louis Stevenson himself convince you:

TO THE HESITATING PURCHASER

If sailor tales to sailor tunes,
Storm and adventure, heat and cold,
If schooners, islands, and maroons,
And buccaneers, and buried gold,
And all the old romance, retold
Exactly in the ancient way,
Can please, as me they pleased of old,
The wiser youngsters of today:

--So be it, and fall on! If not,
If studious youth no longer crave,
His ancient appetites forgot,
Kingston, or Ballantyne the brave,
Or Cooper of the wood and wave:
So be it, also! And may I
And all my pirates share the grave
Where these and their creations lie!