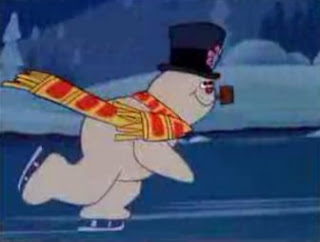 The lovable snowman is back, but his plans to marry the (snow)woman of his dreams are threatened by wicked Jack Frost, in "Frosty's Winter Wonderland." Jackie Vernon, Andy Griffith and Shelley Winters supply voices.

Jules Bass and Arthur Rankin Jr. have long been recognized as some of the best producers of

holiday specials- especially ones for Christmas! Seven years after their success with translating a popular seasonal song into an animated format, Frosty the Snowman came back in Frosty's Winter Wonderland. Despite being considered an "official" sequel to the original special, only Frosty himself returns (still voiced by comedian Jackie Vernon).

There are several new characters in this sequel like Frosty's new wife Crystal voiced by Shelley Winters (a role she would repeat in the third and final Rankin/ Bass Frosty film: Rudolph and Frosty's Christmas in July), my 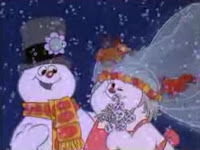 favorite winter character Jack Frost voiced by Paul Frees (who has done a lot of other voice work for other Rankin/ Bass specials), and due to illness, the original narrator Jimmy Durante could not reprise his role so one of my family's favorite actors, Andy Griffith became the narrator instead. While other children were watching Barney, I was watching The Andy Griffith Show so it was interesting to see him play a different kind of character- even if he is just an animated caricature!

Like the original, this Frosty film is completely animated (the third Frosty film is the only one that was produced in the more popular stop-motion animation using puppets) and as with many

others of the day, short-cuts have been taken. Partly because of the short-cuts and also due to some of the story, I’ve never been particularly crazy about Frosty’s Winter Wonderland and I think the first Frosty was much better. Jack Frost takes Professor Hinkle’s place as the bad guy whose not really a bad guy and a pair of horses takes Hocus Pocus (the rabbit)’s place too. Just about the only unique character was Crystal and she just wasn’t that interesting. Rankin/ Bass doesn’t make horrible movies in my book so while this will never be something I really enjoy, it wasn’t very bad and Frosty is still my favorite snowman!