A Jolly, Happy Christmas with Frosty 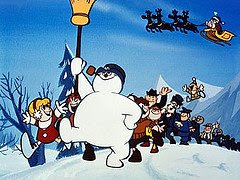 Frosty the Snowman comes alive when the kids put Professor Hinkles hat on Frosty's head. When the temperature starts to rise, and snow melts, Frosty with his friend Karen must find their way to the North Pole before he melts and before Professor Hinkle takes his hat back.

Frosty the Snowman was a fairy tale they say, he was made of snow but

everyone knows that Rankin/ Bass brought him to life one day. Originally only a song written for Gene Autry, it was a major seasonal hit and has since been recorded by numerous artists including the narrator for this special Jimmy Durante in his last film.

However, there is a good reason why this Frosty special isn’t as beloved as Rudolph not the least of which is that even though it’s a great film with great songs it is animated and you can tell that the creators were on a tight budget. Things appear, disappear, and even stay stationary at times but all the goofs are easy to overlook because the film is just so charming!

Better known for their holiday specials like Rudolph the Red-Nosed Reindeer, Rankin & Bass have also produced and directed several animated specials as well including Frosty’s Winter Wonderland in 1976 (there is also a stop-motion animation one called Rudolph and Frosty’s Christmas in July). Nobody has ever done Christmas quite like Rankin/Bass! They’re my favorite for their nostalgic value and of course because they’re just so nicely animated. Plus the songs are all ones I know by heart too.