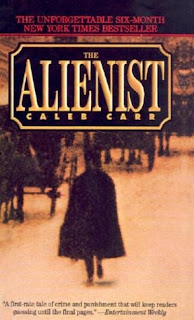 Step into another time- and unforgettable terror.

The Year in 1896, the city is New York; the hunt is on for a baffling new kind of criminal… a serial killer.

The late 1800s was still a dark time in America, especially in New York City. Immigrants, prostitutes (children included), and the poor could kill one another or be killed and more likel 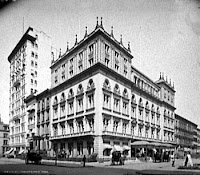 y than not, the cops would look the other way. Caleb Carr’s historical thriller The Alienist (which is what psychiatrists were known as back then) takes place in 1896 during the beginning of the reformation and cleaning up of New York. It’s a bestselling, well- researched, sophisticated mystery/ thriller about catching a serial killer using new forensic methods; mainly fingerprinting and a very new concept back then that is known today as profiling.

I honestly doubt that I would have read this book on my own had it not been a reading group read. The only time I’ve read fiction that accurately portrays New York in this time period was thanks

to Brenda Joyce’s Deadly series and although that had a mystery in it (and some of the later books even talk about the types of prostitution and gambling places back then), Joyce is at heart a romance writer so it doesn’t have the darker, thriller aspect that Mr. Carr accomplishes with his book. I think another thing that contributed to my enjoying the book so much was that I love the TV show Criminal Minds and this was about the beginning of profiling to catch serial killers.

To enhance the story and make it even more interesting, there are 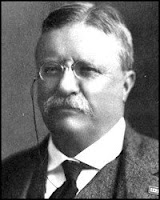 many real life people incorporated into The Alienist too. People good like the major character Theodore Roosevelt (before he became the president), powerful like the gangster Paul Kelly and J. P. Morgan who dominated the corporate world then, and the truly horrible like H.H. Holmes and Jesse Pomeroy to name a few. There are actually tons of other real life people (very few fictional) and places in this story and it’s sometimes a little hard to keep them all straight, but this book was amazing and I can’t wait to read the sequel The Angel of Darkness.

In addition to being a novelist of many other stories- all of them just as well researched as this one, Caleb Carr is also a military historian, which he became interested in when he was younger as a way to put his misanthropic anger to use. Apparently it works well in his novels too because besides being a bestseller, The Alienist was the 1995 winner of the Anthony Award and was also nominated for the prestigious Bram Stoker Award-Novel.

Kreisler & Moore Series: The Alienist and The Angel of Darkness

Picture Explanations
Delmonicos: Is a resturaunt established in 1837. The group eats here a lot in the book.
Headquarters: The place where the profilers work
Theodore Roosevelt: an essential character in the story.
Posted by Ladytink_534 at 5:54 PM