It's All About Men! 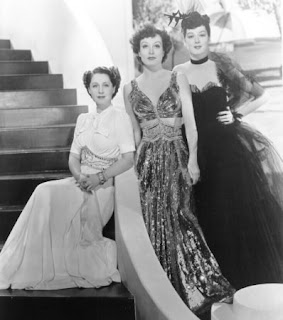 Be careful what you say in private. It could become a movie. Some gossip overheard by Clare Boothe Luce in a nightclub powder room inspired her Broadway hit that's wittily adapted for the screen in The Women.

George Cukor directs an all female cast in this catty tale of battling and bonding that paints its claws "Jungle Red" and shreds the excesses of pampered Park Avenue princesses. Joan Crawford, Rosalind Russell, Joan Fontaine, Mary Boland and Paulette Goddard are among the array of husband snatchers and lovelorn ladies. Norma Shearer is jilted Mary Haines, who ultimately learns to claw without ruining her manicure. 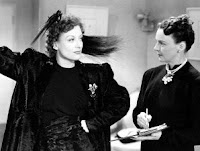 than 600 times. In fact, the play was so popular that it was adapted into a film directed by George Cukor only a few years later. The all-female cast (more than 130 women) featured some of the best actresses of the day including Norma Shearer who plays the main character Mary Haines, Rosalind Russell- her gossipy friend Sylvia, and Joan Crawford as the homewrecker Crystal Allen. Although not an award-winning film, The Women was a still very successful. It was even adapted into a musical called The Opposite Sex in 1956 (which does include men) and there was a remake of The Women in 2008. 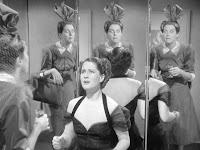 are some great minor cameo roles that should be recognized like Marjorie Main who plays Lucy. Main is one of the funniest actresses to have ever graced the screen with her presence in my opinion. Gossip columnist of the day Hedda Hopper has a brief part as Dolly Dupuyster too.

One of the crowning achievements of the film is the brief interlude in which all of the main characters in the film partake in watching a fashion show, which is the only part of the film that is in color. All of the designs in the entire film are by the famous Hollywood costume designer Adrian (probably

best known for his work in The Wizard of Oz). I was a little shocked that not everyone has been able to see this beautiful piece since it has been edited out of many viewings but it recently has been restored.

I truly love this movie with its all female cast. Any movie that has Rosalind Russell (who I just loved in His Girl Friday), Marjorie Main, and Joan Crawford in it is going to be funny no matter what. True, the sniping, bickering, and backstabbing that the ladies do give women in general a bad name (not to mention the catfights) but it's honestly such a good film!

Links: Wikipedia, Imdb.com, TCM.com, A Who’s Who in “The Women” Past & Present