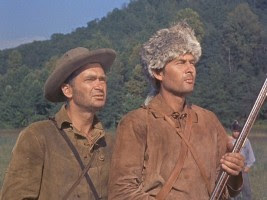 Fess Parker captured the hearts of millions with his strong, confident portrayal of the legendary king of the wild frontier. There's never been a folk hero quite like Davy Crockett, and you'll see why when you watch him "grin" down a bear, battle an Indian chief in a tomahawk duel, and fight for freedom at the Alamo.

These are the action-packed adventures that led to 10 million children sporting coonskin caps and singing "The Ballad of Davy Crockett." As Walt Disney himself proclaimed, the story of Davy Crockett, with its entertaining blend of drama, humor and adventure, will always be a colorful reflection of the frontier spirit. 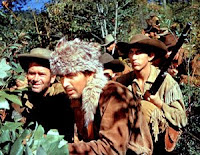 behind the scenes tours and showed people how the Disney magic was made but it also was entertaining. About once a week, a film would be broadcast too but on December 15, 1954, Disney released the first of three films about the legendary Davy Crockett: Davy Crockett, Indian Fighter. The following month Davy Crockett Goes to Congress delighted viewers and in February was Davy Crockett at the Alamo. Shortly thereafter, Disney Productions started marketing merchandise for the film version in which all three episodes were edited into called Davy Crocket, King of the Wild Frontier.

Despite the fact that just about everyone had seen Davy 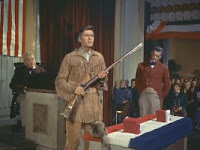 Crockett’s adventures on TV, audiences flocked to the theaters to see it on the big screen, many adorned with their own coonskin hat- the “Crockett craze” was in full swing. That year the theme song The Ballad of Davy Crockett went to number one on the Billboard chart and several covers of it made it in the top 10 as well. Watching it now for the first time more than 50 years later, I can easily see why Disney’s version of Davy Crockett was such a huge hit with audiences young and old.

There were several reasons why I

enjoyed each part of Davy Crockett’s journey but the actual “King of the Wild Frontier” was the main one. The real-life Crockett is rumored to have done many of the things that Disney’s version does but I doubt that he was quite as popular back then as he became in the 1950’s! As wonderfully sincere as Fess Parker is, as (and man, can he give a speech!) an actor, my favorite person in this film was Buddy Ebsen who plays Crockett’s friend and faithful companion George Russel. If it were any other actor, he may have been overshadowed by Parker’s larger than life character but in my mind at least, they shared the spotlight equally. Of course, with Ebsen being the companion, his character was mostly the comic relief though until 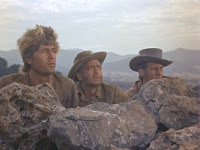 This was such an amazing film and I would have loved to be able to see the original unedited broadcasts of it because I can’t help but wonder how much was left out and added. However, if I had not already known that it was an edited version of three stories collected into one feature, I would hardly be able to tell at all. The story flows almost seamlessly from one scene to the next (although it was awful funny seeing “Davy Crockett” in a suit at one point) with Parker’s “folksy charm” shining through in every piece.

Besides having such brilliant actors in this amazing film, in addition to the beautiful matte art (painting on glass and placing it in the way of the camera so it looks like it’s part of the scene) by Peter Ellenshaw the Disney studio filmed in some truly gorgeous locations (besides California of course) like the hills of Tennessee and the Qualla Indian Reservation in Cherokee, North Carolina too. This is why at the beginning of the film it says:

We extend our thanks and gratitude to the members of the Cherokee Indian Nation
of North Carolina to the Forest Rangers of the Great Smokey Mountains National
Park and to the people of Tennessee and Texas for their generous cooperation in
the filming of this story.