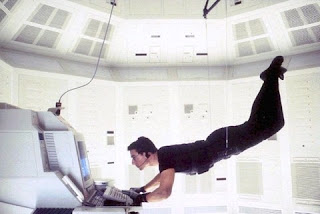 Tom Cruise stars as Ethan Hunt, a secret agent framed for the deaths of his espionage team. Fleeing from government assassins, breaking into the CIA's most impenetrable vault, clinging to the roof of a speeding bullet train, Hunt races like a burning fuse to stay one step ahead of his pursuers...and draw one step closer to discovering the shocking truth.

was adapted for the big screen in 1996 and unlike the TV show, it was to focus mainly on one character: Ethan Hunt. He was to be played by the blockbuster actor Tom Cruise who was also one of the producers for the film. Mission: Impossible was to be one of the most popular action movie franchises in the 1990's and director Brian De Palma's biggest career break to date.

Before Tom Cruise went all weird,

he was actually one of my favorite actors thanks to the marvelous job he did portraying many, many, amazing characters- my favorite of which is Anne Rice's Lestat in Interview with the Vampire. While he is the main character, Mr. Cruise wasn’t the only great actor in the film; Jon Voight plays an interesting character as well. I can't say that I've followed Jon Voight's career closely but I have enjoyed many of t

he films he has been a supporting character in lately (like National Treasure). The character he plays was the main character in the original series and because of how Jim Phelps was handled; none of the other characters from the show took up the offer of cameos in the film.

I did enjoy Tom Crusie’s action film a lot but there was one part of the film that I not only found unbelievable but it also seem unnecessary too: the face yanking off thing was a bit much. I prefer my spy and/or assassin movies a little more realistic. I actually didn't see the ending coming but to be honest, I got a litt

le lost during a few parts of the film. I still think Jason Bourne and his movies beats Ethan Hunt easily any day.

Last year I watched all four Die Hards for the first time and really liked most of them. I finally decided it was time to give Mission: Impossible franchise a chance too. After all, the trilogy has been ingrained into our pop culture so there must be something good about it! While this was not my favorite film, (I think I prefer Die Hard and the Jason Bourne movies more), I was very pleasantly surprised with the first Mission: Impossible. Hmm, maybe I should finally check out those James Bond movies next and see what all the fuss is about there too... 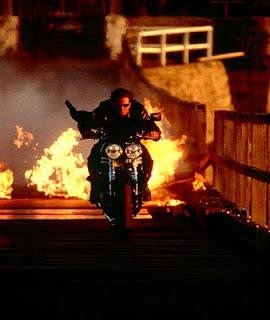 The world's greatest spy returns in the movie event of the year, M:I-2. Top action director John Woo brings his own brand of excitement to the mission that finds Ethan Hunt (Tom Cruise) partnering up with the beautiful Nyah Hall (Thandie Newton) to stop renegade agent Sean Ambrose (Dougray Scott) from releasing a new kind of terror on an unsuspecting world. But before the mission is complete, they'll traverse the globe and have to choose between everything they love and everything they believe in.

Mission: Impossible II is of course the sequel to the action blockbuster four years previously

directed by Brian de Palma. This Mission: Impossible however is directed by the Hong Kong filmmaker John Woo but it still stars Tom Cruise as Ethan Hunt. Also, it was the highest grossing picture worldwide made in 2000, beating out Gladiator (which went on to win Best Picture at the Academy Awards).

As in the first film, there were a few times I found myself a little confused because of some of the plot 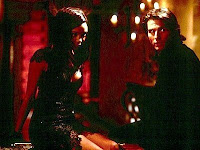 holes but I found out later its because Mr. Woo had originally intended the film to be a little over 3 hours long and the studio objected. There is just way too much action and “impossible” stunts to think to hard about errors though. However, at least for me, some of the more "manly" stunts are actually more funny than cool. The whole motorbike thing near the end was skillfully performed but it did remind me of a jousting match and I thought some of the martial arts stuff lasted WAY too long too.

The plot for M:I: II isn’t much more sophisticated than the first but it sure is full of action sequences! Lots of stuff is blown up, chase scenes, characters in peril, and neat stunts (many of which Cruise insisted on doing himself). I still thought there was way too much of that face-pulling-off shtick but it looks much more advanced in this film thanks to the use of green screen. I was very surprised to see Anthony Hopkins play a small cameo as Mission Commander Swanbeck but he (and Ving Rhames) has some of the best lines in the entire film and he is the first person to ever use the phrase "mission impossible" in any of the films or the TV show for that matter.

2006 was the year of the sequels with film continuations of the Superman, Pirates of the Caribbean, Ice Age, James Bond, and X-men franchises but it was also the year that Mission:

Impossible III came out. Directed by J. J. Abrams, the creator/ writer/ director of the TV show Lost and Felicity; the third Mission shows Ethan Hunt (played by Tom Cruise) a little older, a little more domesticated, and still in as much trouble as usual.

Due to many reasons but mostly because of actor Tom Cruise’s antics at the time, this was the first Mission: Impossible to not make it in the top five grossing films of the year. However, in my opinion, this is the best of the three

films even if there are a few slow spots. No offense to the other two major bad guys in the other two films but Philip Seymour Hoffman is also the best villain of the franchise. He’s just a guy that you love to hate!

While I thought it was the best of the three films story-wise and there are tons of action sequences, I did notice that those sequences weren’t quite as natural looking as in the first two. It seemed to be about bigger and better and that’s not always a good thing. Still, I found that very easy to overlook since the plot flows seamlessly and the actors were really good- especially Jonathan Rhys Meyers as Declan Gormley. He nearly manages to outshine Ethan Hunt and that is a real accomplishment.