The End Is Nigh 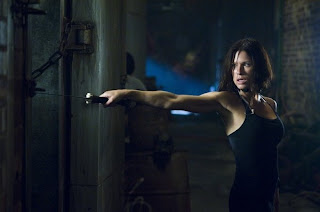 From the director of The Descent comes an action-packed thrill ride through the beating heart of hell! To save humanity from an epidemic, an elite fighting unit must battle to find a cure in a post-apocalyptic zone controlled by a society of murderous renegades. Loaded with ferocious fights and high-octane chases, Doomsday grabs you right from the start and doesn't let go till its explosive end!

but the writer and director made the end-of-the-world scenario only quarantined to one location-Scotland. This country had all the modern conveniences before its people were left to die but at the same time, there were castles from the olden days so it was only natural for the survivors to either become “futuristic soldiers” or “medieval knights” in order to survive. Marshall was also inspired by several movies from the 80's like Escape from New York and Mad Max.

If I had not already known that this was written by the director I would probably think that like many movies lately, it was based on a graphic novel or something. This film reminded me a bit of I Am Legend but while I really disliked that film, Doomsday was actually a whole lot better than I expected. Of course, it is a little gross at times (it‘s rated R for a very good reason), but still manages to be a somewhat intelligent and interesting action/ sci-fi

film! I liked the idea of how a society would survive when the world abandoned them by creating their own worlds in the past or future.

Another thing the film has going for it is the fact that it has quite a few great actors attached such as Rhona Mitra (Underworld) as Major Eden Sinclair, Bob Hoskins (Who Framed Roger Rabbit) as her boss and mentor Bill Nelson, and even Malcom McDowell ha

s a pivotal role as former scientist Marcus Kane that has now set himself up in a castle as a king, plus many, many more.

Even though Neil Marshal is known for his horror films, Doomsday isn't one of them. It's bloody, gory, and sometimes disgusting (there are cannibals on the other side of the wall) true, but this post-apocalyptic film is more of an elaborate drama. Would I enjoy this film half as much if it had had a smaller budget? Probably not, but I would have liked it a whole lot more if some of the "ew" and "ick" parts were removed.