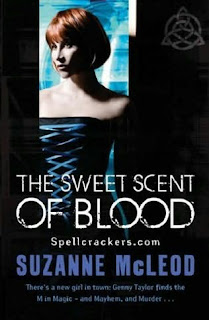 My name is Genny Taylor. I work for Spellcrackers.com. It’s a great job, pays the rent, lets me do the thing I’m good at- finding magic and cracking it- and the bonus is it’s run by witches, which stops the vamps from taking a bite out of me.

Not that vampires are the big bad any more, not since they launched a slick PR campaign- oh, and they brought the goblins on board. Now the vamps are sought-after celebrities, and Getting Fanged and taking the Gift are the new height of all things cool. But only if you’re human.

And I know firsthand just how deadly a vampire can be.

Suzanne McLeod described The Sweet Scent of Blood as "a sexy, fast- 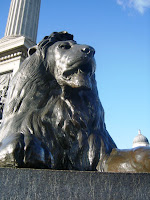 paced urban fantasy set in London with hot vampires, eccentric goblins, a cool faerie and plenty of magical plot twists." It's the first book in her Spellcracker series as well as her first published work yet it certainly doesn't read like one! Charlaine Harris (author of the Sookie books that were made into the HBO series True Blood) was quoted as saying it was one of her favorite reads.

A native Londoner, it’s no wonder Suzanne McLeod set her first book there though it’s not quite the London of our world. In The Sweet Scent of Blood we meet witches, a brownie, goblins, vampires, 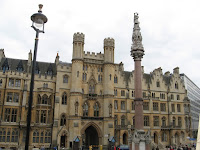 a troll (who is a police officer!), and even a satyr among others- including some fae. The main character Genny Taylor is actually sidhe, which is a type of noble fae. I really did like Genny since she’s witty and gives as good as she gets even when it looks like the odds aren’t in her favor. However, my favorite secondary character was Finn (the satyr) so I really hope he shows up in the future stories. 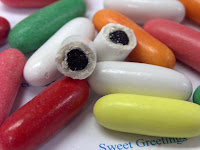 Exploring McLeod’s new world was a lot of fun and I truly enjoyed getting to know all the characters. At it’s heart this was a murder mystery and a really good one at that but it’s so cleverly written that it hardly seems like it. Though the Spellcracker series is hard to get over here in the US, I’m expecting many more great stories from Ms. McLeod.

Over the last few years, the vampires had crawled out of their coffins (not that I’d ever known one to actually sleep in a coffin) and brushed the dirt from their public image. They’d poured new blood into British Tourism and transformed the more presentable among themselves into A-list celebrities.

First Paragraph: The vampire looked a beautiful, dangerous cliché. Jet-black hair tied back in a French plait emphasized the pale angles of his face. Shadowed grey eyes stared out with moody promise. Black silk clung to hard abdominals while soft leather stretched down long, lean legs. An ankle-length coat pooled across the stone steps on which he sat so it seemed he existed in his own well of seductive darkness. Behind him, the ferris-wheel silhouette of the London Eye, backlit by exploding fireworks, added a less than subtle suggestion to the scene.

Special Thanks: I won this book from the author Suzanne McLeod (she even autographed it for me!).

Picture Explanations
Trafalgar Square Lion: Genny has to stop some pixies from trying to animate these!
Scotland Yard: Genny spends a fair bit of time here since her friend works here and since she took Bobby’s case.
Liquorice Torpedoes: Genny’s favorite candy which helps with the magic (sugar rush makes magic easier).
Posted by Ladytink_534 at 11:17 PM