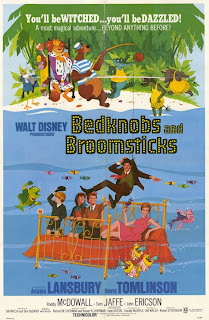 An Academy Award Award winner for Best Visual Effects, Bedknobs and Broomsticks features a spellbinding mix of live action and animation that makes it one of Disney’s most delightfully endearing classics.

Screen legend Angela Lansbury gives a bewitching performance as an amateur witch who reluctantly takes in three precocious orphan children. The children soon find themselves swept aboard a flying bed, its magic brass bed knob their ticket to one fantastic adventure after another-- including a visit to an enchanted island inhabited by wondrous animated animal characters! The foursome eventually join forces with an amusing professor to track down an ancient incantation that could save the country from hostile invaders!

Now it’s *your* turn to take a ride of Bedknobs and Broomsticks, a fun-filled flight of fantasy, music and Disney magic for all ages!

After Walt Disney died, many of the movies that the studio were working on beforehand that had his personal input on were pushed through. Including one that Walt had bought the rights to

while waiting for P.L. Travers to give in and sell the rights to her Mary Poppins books. The rights he bought were to Mary Norton’s (author of The Borrowers) two books The Magic Bedknob; Or How to Become a Witch in Ten Easy Lessons (1943) and Bonfires and Broomsticks (1947) which were both loosely adapted and became the film Bedknobs and Broomsticks. This film was also nominated for five Academy Awards, but won only one for Best Special Effects. 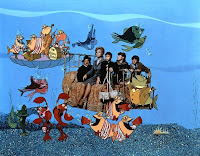 Often compared to Disney’s Mary Poppins because not only does it have actor David Tomlinson (supposedly Julie Andrews was offered a part as well but had other commitments) and an animated sequence in common but even the song writers are the same (one of the melodies not used in Poppins became the song The Beautiful Briny Sea). Those songwriters are my favorite composer duo: the Sherman Brothers (their song The Age of Not Believing was an Academy Award nominee)! However, Bedknobs

and Broomsticks was actually more expensive to make than Poppins. Because of the expense put into the movie, the special effects are actually incredibly well done and though you occasionally can see strings on some of the actors and props, everything still holds up to the test of time. The Academy Award win was well-deserved in this case.

In this special 25th Anniversary

edition, most of the missing 30 minutes (which includes a few songs and chunks of the Portobello Road number) cut from the original film has finally been replaced. Thanks to the hard work of Scott McQueen, this film is almost the way it was originally intended to be seen. The edited version that most people have seen takes a great deal out of the picture so there were lots of things that were explained (the kids are orphans, Roddy McDowell was an even more annoying secondary 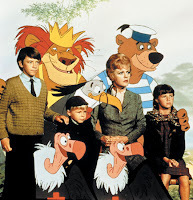 character trying to court Miss Price for her property, and there were tons of songs cut as well) that had previously seemed a bit like holes in the story to me, even when I was younger. As interesting as it is, the 12 minutes of the Portobello Road sequence could have continued to stay edited in my opinion though I still enjoyed the salute to the nation dances.

That’s not to say that this film is any less wonderful edited or unedited though. Ward Kimball’s wonderfully directed animation sequence alone is worth watching this but add in The Sherman Brothers’ songs… it’s just magic. I’ve always loved Angela Lansbury and she’s wonderful in this Disney World War II musical. This is a great film because it “really doesn’t matter what it [does] as long as it [does] it with a flair.”

Links:
I created a quiz for this movie at Fun Trivia in 2005
Several major film clips from the movie are on ReelzChannel
There is a great article on the film at D23
Wikipedia article on the movie
Imdb.com's page
Scanned article pages on Bedknobs and Broomsticks at Tulgey Wood

Interview:
Animated Views with song writer Richard Sherman (includes lots of great photos)
TCM has a few interesting things on their site about Bedknobs and Broomsticks including an orginal press book which has interviews with just about every one involved in the film including one of Disney's 9 Old Men Ward Kimball in it who directed the animated section of the film, Angela Lansbury, David Tomlinson, the kids in the film, and many, many more!