Haunted by Her Past 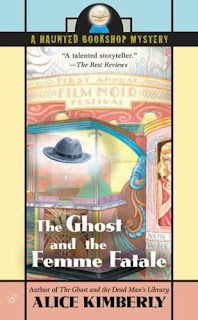 The Movie Town Theater is holding its first ever Film Noir Festival, with Penelope Thornton-McClure handling book sales for the guest speakers, including screen actress Hedda Geist. The legenday femme fatale has been out of the spotlight for decades. Unfortunately, the moment she steps back into it, she’s nearly killed. Then other guests start to die, and Penelope wants to know why her little town’s film noir weekend has taken a truly dark turn.

With local police on the wrong track, Penelope enlists the help of Jack Shepard, PI. Okay, so Jack hasn’t had a heartbeat since 1949, when he was gunned down in what is now Pen’s store. But the hard-boiled ghost actually remembers Hedda’s dark past and Penelope is sure he can help solve this case-- even if he and his liscense did expire more than fifty years ago…

Film noir, an old murder, and new ones galore pop up during Alice 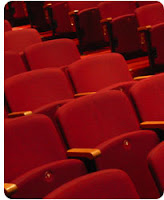 Kimberly’s fourth book in the Haunted Bookshop mystery series The Ghost and the Femme Fatale. As usual, Pen and Jack are right smack in the middle of the chaos created by Marc Cerasini and Alice Alfonsi (they are the married couple that also write the Cleo Coyle Coffeehouse Mysteries).

“I, Penelope Thornton-McClure, single mom, widow, and independent bookshop owner, was far from a professional sleuth. Sure, I was a longtime fan of the Black Mask school of detective fiction; but a few years back, when the Rhode Island Staties were eyeing me as a person of interest in a murder investigation, I’d needed more than a fictional detective, 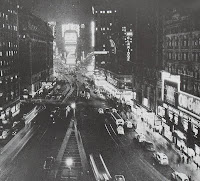 and I got one.” His name is Jack Shepherd and he was a PI in life so it’s only natural that he is one in death as well and he has been coaching Pen how to be a sleuth since their very first “meeting” in The Ghost and Mrs. McClure. Three books later, and Pen has finally come into her own in The Ghost and the Femme Fatale.

Like all of the books in this series so far, this cozy mystery really delivers! This was the first time I didn’t have even the slightest clue who the murderer was because there were so many good suspects but nothing quite fit for one reason or another and as Jack said, “If the pieces don’t fit, the puzzle ain’t solved.”

irst started this series I wasn’t very fond of the main character though she’s supposed to be a "a younger version of Agatha Christie's feisty amateur sleuth Miss Marple" but I have to admit that she really grew on me and I thought she did an admirable job during The Ghost and the Femme Fatale. However, it’s because of Jack that I keep reading. Well that and the sparks between them which, I have to admit is a bit odd since Jack is a ghost but it does work. It’s this growing attraction between the two is what keeps ultimately pulling me back into the series too.

First Paragraph: The spring evening was cool, the 950-seat movie house was packed, and Jack Shepard was on the job, watching a too-young chippy enjoy a night at the pictures with her paramour.

Picture Explanations
Theater Seats: The film noir festival was arranged once the old town theater was restored and many important scenes take place inside.
NY Times Square 1940s: Jack is able to transport Pen into his memories and he takes her to New York on one of his cases
Film noir posters: Takes place during a film noir festival
Posted by Ladytink_534 at 8:22 PM