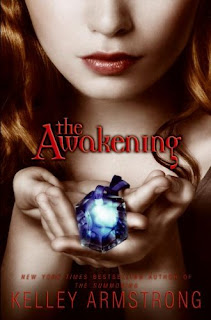 If you had met me a few weeks ago, you probably would have described me as an average teenage girl-- someone normal. Now my life has changed forever and I'm as far away from normal as it gets. A living science experiment-- not only can I see ghosts, but I was genetically altered by a sinister organization called the Edison Group. What does that mean? For starters, I'm a teenage necromancer whose powers are out of control; I raise the dead without even trying. Trust me, that is not a power you want to have. Ever.

Now I'm running for my life with three of my supernatural friends-- a charming sorcerer, a cynical werewolf, and a disgruntled witch-- and we have to find someone who can help us before the Edison Group finds us first. Or die trying.

While writing the second book in her Women of the Otherworld series, Kelley Armstrong was inspired by the scientist's experimentation in Stolen to write a young adult novel. Once she started writing (during the NaNoWriMo) however she realized that she had enough good material to write a trilogy called The Darkest Powers. In the first book 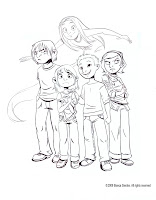 The Summoning, the reader as well as the main character Chloe learns that she can see ghosts and during the second book, The Awakening the reader starts to find out why.

The main character of this trilogy is “Chloe Saunders, fifteen-year-old Steven Spielberg wannabe, her dreams of writing and directing Hollywood blockbusters shattered on the day she got her first period and started living the kind of life she'd once imagined putting on the screen. That's when [she] started seeing ghosts.” A few questions were answered in this book including just what the kids from Lyle House are (I was starting to operate under the theory that they were clones but Armstrong came up with something much more interesting) but many more questions were raised.

In my opinion, this was much better than the first book though it

can be argued that The Awakening ends on a cliffhanger too. However, I felt that unlike The Summoning, it was at a pretty good stopping point and starting point for the last book in this trilogy The Reckoning. However, it isn’t the last in this series since Armstrong is planning on writing “a new trilogy set in the same world, with all new characters, about another Edison Group experiment.”

“Now, looking back on a life of doing what I was told, I realized I'd bought into the game. When adults patted me on the head and told me I was so grown-up, what they really meant was that they were glad I wasn't grown-up enough yet to question, to fight back.”

First Paragraph: When the door to my cell clicked open, the first thought that flitted through my doped-up brain was that Liz had changed her mind and come back. But ghosts don't open doors. They will, on occasion, ask me to open one, so I can raise and interrogate the zombies of supernaturals killed by a mad scientist, but they never need one opened for themselves.

Links:
Chloe Saunders has her own MySpace!
Kelley Armstrong has created a blog for her character Chloe on livejournal
FanPop page