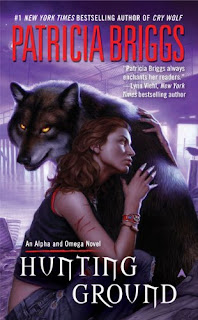 Cry Wolf unlocked the doors to a unique urban landscape in “a great… new werewolf series.” Now Patricia Briggs invites readers to follow her even deeper intot that seductive realm of the unknown…

Anna Latham didn’t know how complicated life could be until she became a werewolf. And until she was mated to Charles Cornick, the son-- and enforcer-- of Bran, the leader of the North American werewolves, she didn’t know how dangerous it could be, either…

Anna and Charles have just been enlisted to attend a summit to present Bran’s controversial proposition: that the wolves should finally reveal themselves to humans. But the most feared Alpha in Europe is dead set against the plan-- and it seems like someone else might be, too. When Anna is attacked by vampires using pack magic, the kind of power only werewolves should be able to draw on, Charles and Anna must combine their talents to hunt down whoever is behind it all-- or risk losing everything…

“Seattle is a city with a certain… panache. Never know what you are going to find when you come for a visit. Good food, friendly people, ancient legendary weapons.” Not to mention a

werewolf summit, vampires, and even some fae thrown in for good measure. [There‘s] “Always something different” in one of Patricia Briggs’ novels and that holds true for the second book in her spin-off Alpha and Omega series, Hunting Ground. The sequel to Cry Wolf, Hunting Ground takes place during the author’s main series book Blood Bound which is the second Mercedes Thompson.

I first discovered Patricia Briggs through her bestselling Mercy Thompson books which led me to picking up an anthology called On the Prowl in which the author had contributed a story set in the same world starring different but slightly related characters. That story was the jumping off of a new series called the Alpha and Omega of which the first one was Cry Wolf and the sequel has come out.

The Mercy series will always be my favorite books by Patricia Briggs but the Alpha and Omega series is coming along nicely! Anna isn't quite as reticent as she was in the first book (she did have good reason to be) and it's even revealed that she has a bit of sass to her still. With being Charles mate her emotional wounds are really starting to heal.

An interesting note about this series: Charles shares equal POV time with Anna which I thought was unique. He has such a way of t 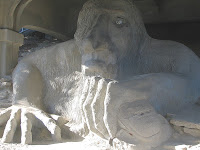 hinking and speaking that sometimes shows his age (200 years give or take) at times and then on the flip-side just how down-to-earth Anna helps him be. Also, it shows his struggle with being his father's (the Marrok- kind of like the king of the North American werewolves) "hatchet man." He's good at it and it's a necessary job but he doesn't like it and because of it, he keeps walls between himself and the world.

Not to mention that when Brother Wolf "speaks" it's an experience all it's own. Brother Wolf is the werewolf in Charles. Unlike all the werewolves that have been introduced in either of Briggs' se

ries, Charles was born a werewolf not bitten and he has some different "abilities" than the others including the fact that his wolf and him are seperate beings but yet of one soul and one body. Briggs' werewolf lore is just so neat! Although Mercy was raised by these werewolves (Sam is Charles is brother by the way), she isn't one so the author barely skims the surface in those books. Yet here it's almost like an entirely different world!

Now that I've gushed about the characters I can talk about the plot. Well, not too much more than the synopsis above because the mystery will be spoiled but I do have to mention that the mythological angle was surprising and very pleasing as well. There was a hint here, I believe that one of the secondary (but important) characters used to be a mythological legend and I'm really, really curious to see if I'm right about that in the future books.

First Paragraph: She observed him from her chosen cover, as she’d done twice before. The first two times he’d been chopping wood, but today, after a heavy snowfall appropriate for the middle of December. He was shoveling the sidewalk. Today was the day she’d take him.

Picture Explanations:
Excalibur: There is a character in the book obsessed with Arthurian legends who believes he's found Excalibur.
Troll: The stone troll in the book is based on the real Fremont troll.
Winter: It's December where Charles and Anna live.
Posted by Ladytink_534 at 4:18 PM