New Orleans Story with a Ghost 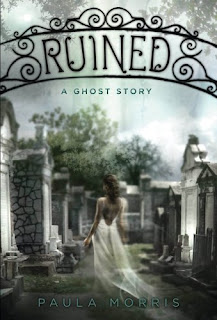 Welcome to New Orleans: City of Voodoo and Beauty. Of Hurricanes and Hauntings.

Rebecca Brown couldn't feel more out of place in New Orleans, where she comes to live while her dad is away on business. She's staying in a creepy house with her aunt Claudia, who reads tarot cards for a living. And at the snooty prep school, a pack of filthy-rich girls treat Rebecca like she's invisible. Only gorgeous, unavailable Anton Grey seems to give Rebecca the time of day, but she wonders if he's got a hidden agenda.

Then one night, among the oak trees in Lafayette Cemetery, Rebecca makes a friend. Sweet, mysterious Lisette is eager to show Rebecca the nooks and crannies of New Orleans. There's just one catch.

Lisette is a ghost.

A ghost with a deep, dark secret, and a serious score to settle.

As Rebecca learns more from her ghost friend- and she begins to trust Anton Grey- she also uncovers startling truths about her own history. Will Rebecca be able to right the wrongs of the past, or has everything been ruined beyond repair?

After seeing a tarot reader who claimed that Hurricane Katrina had displaced New Orleans' ghostly residents as well as it's corporal ones, author Paula Morris was inspired to write about a ghost named Lisette and she called the book Ruined. A native New Zealander, the author and her 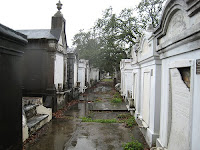 husband moved to New Orleans about a year before Hurricane Katrina and fell in love with the city and it’s history. Ms. Morris has taught courses on the history of Mardi Gras, and on the city’s literary past. She also conducts literary tours too and all of this served her well in the writing of Ruined.

Though I have been to New Orleans previously (a couple of months before Hurricane Katrina and yes the author does reference projects about rebuilding New Orleans like ACORN but none are entirely out of left field. Ruined is not a "Katrina narrative" but the shadow of that storm does touch the book) , most of the places mentioned in Ruined such as the Layfatte cemetery, the Garden District, and even the Mardi Gras parades were places and things I’ve never seen before so I was impressed with the research that the author did on New Orleans for the story. I thought Paula Morris did a terrific job of bringing it all to life especially thea places that are no longer there, and events that happened so vividly that the 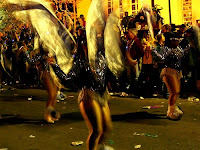 The ghost and curse and the mystery of how they related to the main character is what kept me reading this book since I never connected to the Rebecca. She wasn’t a bad character, I just never felt like I knew her. She was a girl from New York staying in New Orleans and she hated it and that’s what I ultimately came away with at the end of the story. I felt like she spent more time reading about New Orleans’ history than actually getting out and exploring the city too. One of the best parts of the book is the walk to Lisette’s old home, especially when Lisette is talking about the places that used to be there. “It’s strange to think of how the past gets swept away,” Rebecca mused. She wondered how long it would be before Lisette’s house was demolished, cleared away with no trace, like all those houses and streets in old Storyville.
“The past doesn’t go away.” Lisette gazed up at her house. “Yo

u just can’t see it anymore.”

Ghosts have fascinated me for as long as I can remember, I was borrowing collections of ghost stories from the library when others were read The Chronicles of Narnia. I’ve never seen a ghost before but that doesn’t necessarily mean one hasn’t seen me! Like I’ve always said, I’ll believe in just about anything until proven wrong. The setting was the best part of the book in my opinion and even that did have it’s issues but in the end I liked this story. I do know I wouldn’t have liked it nearly as much if it didn’t have Lisette in it. Ruined did make me want to read more paranormal stories set in New Orleans though.

Special Thanks: I won Ruined from a no longer active blog called Must and Lust for Books.

First Paragraph: New Orleans, the summer of 1853. Yellow fever ravages the busy port city. Bells toll for the souls of the dead. Boats on the Mississippi River are placed in quarantine, their cargoes left to spoil, their crews felled by disease. Before the summer is over, eight thousand people will die.

That evening two strangers had come to her rescue-- one a black ghost who she shouldn’t be able to see, the other a Patrician white New Orleanian she’d been told to avoid. Perhaps she’d never see either of them again. And if she did, Rebecca knew one thing for certain: Aunt Claudia would not approve.

Everyone on the street seemed to be having a great time, but to Rebecca the whole experience felt increasingly surreal, and at times almost sinister.

There was something almost contemptuous in the casual way the doubloons were thrown, and something desperate and eager about the way they were grabbed up. It was as though these men were acting out, in pageant-style costume, the way they saw their role in the city: as smug lords and masters, generous only when they felt like it, socially superior to everyone else.