What Happens in Vegas… Sometimes Follows You Home 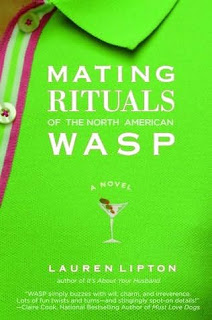 Peggy Adams is upset when she wakes up next to a strange man after a Vegas night she can’t remember… but she’s horrified when she discovers she marreid him! Luke Sedgwick is WASP royalty, the last of the New Nineveh, Connecticut, Sedgwicks. He might also be perfect, if Peggy weren’t already “pre-engaged” to her live-in boyfriend of seven years (she even has a “promise ring” to prove it). Peggy and Luke agree to get an annulment ASAP-- and then receive an offer they can’t refuse…

Luke’s eccentric great-aunt Abigail offers the two the chance to make millions on the family estate: All they have to do is stay married for a year. Peggy is soon pretending to be one-half of the perfect couple aming New England’s WASPy set on the weekends, while keeping her marriage a secret during the week. But she isn’t prepared for what might be her worst mistake of all-- falling in love with her soon-to-be ex-husband. 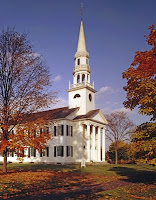 he North American WASP (originally supposed to be titled Missus Weekend) and like her first book It’s About Your Husband (published in 2006), the story is women’s fiction… not about bugs like a the cover implies. Actually, WASP stands for White Anglo-Saxon Protestant and that is whom Peggy accidentally marries after “tee many martoonies” while in Vegas.

My favorite thing about The Mating Rituals of the North American WASP was its secondary characters such as Tiffany, Bex (best friend) and most especially Luke's Aunt Abigail (mostly comic relief and the whole crux of the book). In my opinion, they were better than the main characters! Tiffany doesn’t seem like that big of a character but she 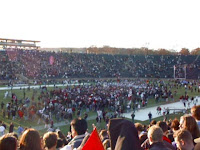 was Peggy’s New Nineveh best friend who also isn’t considered “one of us.” “To be “us” was to claim one’s place in a club whose members were utterly convinced of their own moral and social superiority. A club that couldn’t exist unless it excluded anyone whose background, religion, or genetic code didn’t measure up.”

There were some problems with the story though. Like the fact that the whole reason Peggy agrees to the pseudo marriage is because she needs money to keep her business from going under and yet she can afford i 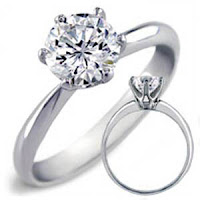 mported toothbrushes, an acupuncturist, a facialist, etc.? That bothered me a bit but Luke was what really bugged me. He writes poetry so his thoughts wander several times throughout the story, usually in the middle of something! I just didn't get why the author would do that. He's a poet, and a good one but when it seems to grind the flow of the story to a halt is when I have issues.

The town of New Nineveh is one of the main settings of the book and it’s based on the town Ms. Lipton "weekends" at in Litchfield, Connecticut so the author does come off very passionate about a few issues in the book such as the "rural town [becoming] inundated with strip malls and housing developments." However, it doesn’t really overwhelm the reader since this story is mainly all about its characters and they are the reason I liked this story.

Special Thanks: I won this book via Peeking Between the Pages

First Paragraph: Something wasn't right, and she knew it before opening her eyes.

When he was having a particularly bad time in the market, which so far in his new career of Sedgwick family financial manager was the rule rather than the exception, he would cheer himself with fantasies of the house’s demise. In his current favorite, Abigail’s beloved black cat, Quibble, in a rare daytime foray out from under Abby’s bed, leaped onto the mantel in the grand parlor, setting off a chain of events ending with the cat still perched calmly on the intact fireplace surrounded by three stories of rubble.

Abigail drew her mouth into a frown. “Leaving lights on wastes money. And if I need to talk, I’ll talk to Quibble. I don’t like that cellular geegaw. I don’t trust a phone without a cord.”

“You’re insane,” Bex’s disembodied voice barked out from the intercom at the entrance to her and Josh’s building. “I mean, you’re insane generally, but scared-of-everything insane, not throw-all-caution-to-the-wind insane.”

““You know what we should sell at the store? Ritual products. Like candles that smudge away the demonic traces left behind by ugly furniture. One-Night-Stand-Erasing Linen Water. Bad-Neighborhood-Begone Body Lotion with Garlic and Citronella.”
Peggy laughed. “A home fragrance called Exorcism. Which I’ll be the first to buy for the Sedgwick House.”

“You people are lunatics,” Bex scoffed. “You can wear pants like that [go-to-hell pants], but you won’t say one little ‘I love you’? Don’t be such a WASP Luke. You’ve got five weeks left before you lose Peggy forever. If that doesn’t call for drama, nothing does.”
______________

Picture Explanations
Church: Peggy goes to church with Miss Abigail.
Game: Peggy and Luke go with his friends to a tailgate party for the Yale-Harvard game.
Engagement Rings: “In the span of a couple of months, she’d gone from a woman without a ring to a woman with one ring too many.”
Posted by Ladytink_534 at 11:50 PM