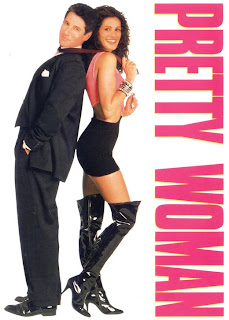 Academy Award nominee Julia Roberts (Steel Magnolias) and Richard Gere (An Officer and A Gentleman) light up the screen in the most irresistable comedy of the year! When successful corporate mogul Edward Lewis (Gere) meets independent and carefree Vivian Ward (Roberts) their two lives are words apart. But Vivian's energetic spirit challenges Edward's no-nonsense, business-minded approach to life, sparking an immediate attraction. He teacher her about the finer things in life; she teaches him that love could be the best investment he ever made. Capturing hearts of critics and moviegoers alike, this modern-day rags-to-riches romance entertains with its upbeat blend of humor, passion, and unforgettable fun! Pretty Woman-- you'll feel great every time you see it!

For over twenty years the song "Oh, Pretty Woman" was associated with it's singer Roy Orbison and then 1990’s third highest grossing film came along. After that, Pretty Woman became synomous with Julia Roberts and Richard Gere. Originally it was intended to be a dark drama called $3000 about drug-addicted

prostitution until it was picked up by Touchstone Pictures; which is a Disney corporation, and they persuaded J.F. Lawton to turn it into a Cinderella fairy tale romance. The opera featured in Pretty Woman is called La Traviata and it is said to have served as inspiration for the film.

Sometimes this movie is compared to Pygmalion, commonly known as My Fair Lady which is ironic since it’s one of my favorite films of all time. The actor who plays David Morse (Alex Hyde-White) is the son of the major character in that film Colonel Pickering (Wilfrid Hyde-White). This was Oscar-winning

actor (for The Awful Truth in 1937) Ralph Bellamy’s (the elder Mr. Morse) last role before he died. Several Hollywood big names from Al Pacino for Lewis (Richard Gere’s role) to Molly Ringwald, Daryl Hannah, Meg Ryan, and Michelle Pfeiffer for Vivien (Julia Roberts) and Demi Moore for the character Kit (played by Laura San Giacomo) all turned down the roles for various reasons but for the women it was mostly because they couldn’t get past the idea of having the main character be a prostitute. Several of these actors and actresses have stated over the years (except Hannah) that

The soundtrack for this movie was almost as popular and well known as the movie itself! I even own a copy. The Recording Industry Association of America (RIAA) has certified it three times. Most of the songs featured in this film like "It Must Have Been Love" by Roxette, "King of Wishful Thinking" by Go West, and "Wild Women Do" by Natalie Cole all feature either clips or homages to the film in their official music videos. BMI (Broadcast Music, Inc.) honored James Newton Howard with their annual film award for his work on Pretty Woman.

As a child in the 90’s, I grew up with Pretty Woman as one of the most popular movies and you’ll never hear me complain. It was our generation’s Cinderella

and even if it was rated R, many kids loved it just as much as the adults did. Roberts even won a Kid’s Choice Award in 1991 as Favorite Movie Actress. She certainly was mine when I was a kid! The fashions have definitely changed since this movie but they’re all still lovely. I’ve always loved Viviene’s black cocktail dress the most. Even though Julia Robert’s breakout film was Steel Magnolias (it earned her an Oscar nomination for Best Supporting Actress), it was Pretty Woman that catapulted her to stardom. She was nominated for an Academy Awards Best Actress for her work in this film too. She did win a Golden Globe and the film itself, Richard Gere, and Hector Elizondo (Bernard the hotel manager) were nominated for one as well. Gere and Roberts reunited with the director of this film in 1999 for the romantic comedy Runaway Bride. Whether it’s the music, the clothes, or the fairy tale you want, Pretty Woman has still got it.

[After negotiating for three thousand dollars]
Vivian: I would have stayed for two thousand.
Edward Lewis: I would have paid four.

Edward Lewis: It's just that very few people surprise me.
Vivian: Yeah, well, you're lucky. Most of 'em shock the hell outta me.

Vivian: People put you down enough, you start to believe it.
Edward Lewis: I think you are a very bright, very special woman.
Vivian: The bad stuff is easier to believe. You ever notice that?