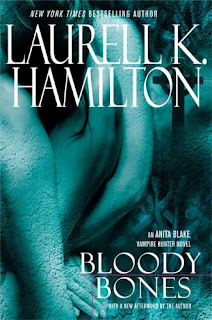 When Anita Blake's boss at Animators, Inc., informs her that she's expected to raise 300-year-old zombies from a field of jumbled bones just to settle a land dispute, she's understandably annoyed. But as soon as she arrives in Branson, Missouri, to do the deed, the job gets more interesting. A psychotic sword-wielding vampire starts committing multiple murders in the area, and Anita must call on Jean-Claude, her powerful fanged suitor, for help. As always, Anita prevails over the undead, keeping Jean-Claude at arm's length, clearing the cemetery land of an ancient enchantment, and nailing the vampiric killer in one fell swoop.

"First, there were the dead in the graveyard - two-hundred years dead. I'd been hired to raise them to settle a dispute over who owned the land they were buried in. Then there were the three dead teenagers in the woods, slaughtered in a way I had never seen before. And then they found the dead girl, drained of blood and left in her bed. I knew what that meant, all right. It didn't take a degree in preternatural studies to figure out that something was very wrong in and around Branson, Missouri. My name is Anita Blake. Welcome to my life..."

Published the same year as The Lunatic Café but set three months later, the fifth book in

Laurell K. Hamilton’s Anita Blake series is Bloody Bones. Anita with her new trainee Larry Kirkland is called out of town (for the first time) to raise a graveyard and while there they’re called in to help on a couple of murders. An extremely old vampire pedophile is on the rampage and when a boy goes missing, Anita calls for backup from the only vampire she personally knows… Jean-Claude. Of course, coming to her aid may just cost him, as it’s always dangerous to venture into another master vampire’s territory. 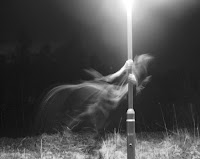 here’s also a side plot involving faeries whose ancestors are reputed to be the dead that Anita is contracted to raise. This was four years before her Meredith Gentry series, but these faeries aren‘t quite the same and Ms. Hamilton has said that the Bouviers won‘t be making an appearance in that world. It’s very interesting to note that the few that are in this book do share some characteristics of the fae in her other later series though.

This was the first book where Edward doesn’t appear but Jason comes back as Jean-Claude’s pet (pomme de sang). Hamilton says, “Now, yes, his first appearan

ce was in book four, LUNATIC CAFE, but he was just a bit player to me then. I had no idea he would show up again, even once, let alone that he would be one of the most constantly appearing characters in my series. It was Bloody Bones where Jason became a person for me. Strangely, that was also the book where Jean-Claude began to be a person and character to me and Anita, and not just a vampire that we needed to avoid.” I think this is because it’s the longest time the two have spent around each other so far, not to mention we got to learn a little about Jean-Claude’s background. The Killing Dance is up next!

The mood was sort of spoiled. Nothing like knowing your girlfriend is dating someone else to take the wind out of your sails. I wouldn't have put up with it if it was the other way around. A double standard that, but one we could all three live with. If living was the term for Jean-Claude.

I'd lied to the nice agents. It wasn't the fact that I raised zombies that got me in good with the vampires. It was the fact that the Master of the City, of St. Louis, had the hots for me. Was maybe in love with me, or at least thought he was.

"A vampire pedophile; isn't that against the rules?"
"What rules?"
"That you can only be one kind of monster at a time."
"It kind of caught me off guard, too."

But then, lately I'd been rethinking exactly what made you human, and what made you one of the monsters. Once I'd been very sure of myself, and everyone else. I wasn't so sure anymore.

First Paragraph: It was St. Patrick's Day, and the only green I was wearing was a button that read, "Pinch me and you're dead meat." I'd started work last night with a green blouse on, but I'd gotten blood all over it from a beheaded chicken. Larry Kirkland, zombie-raiser in training, had dropped the decapitated bird. It did the little headless chicken dance and sprayed both of us with blood. I finally caught the damn thing, but the blouse was ruined.

Picture Explanations
Sword: Something is butchering teenagers and young boys in the woods.
Ghost: They can’t hurt you but they do gain power if you pay attention to them.
Coffin: Vampires don’t have to sleep in coffins but it’s highly recommended…
Posted by Ladytink_534 at 8:28 PM