Vampire Council and the Inferno 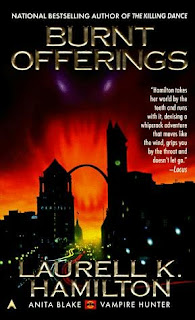 In Laurell K. Hamilton's New York Times bestselling novels, it's often hard to tell the good from the evil. Just ask Anita Blake. She seems to be developing a soft spot in her heart for vampires-- one in particular. So, when an arsonist's flames begin licking at St. Louis's undead, it's up to Anita to save the very monsters she's sworn to destroy.

"GOOD GIRLS DO NOT HAVE PREMARTIAL SEX, ESPECIALLY WITH THE UNDEAD....
But here I was, doing it. Me, Anita Blake, turned into coffin bait. Sad, very sad... You can't trust anyone who sleeps with the monsters...." 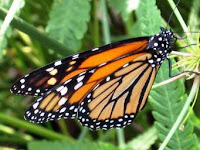 Burnt Offerings (which is the name of a monster movie themed restaurant in the book), Anita is playing politics from werewolf pack to vampire when the vampire council sends emissaries to town, mainly because of the killing of another council member Mr. Oliver from the third book The Circus of the Damned. The council is “the stuff of nightmares [and] nightmares don't care how strong you are."

Burnt Offerings is one of the most memorable books in this series. It’s one of my favorites for a number of reasons but mainly because this is when Anita really starts to become a leader (and lupa) of her two shifter groups the wolves and the leopards. Oh and the Inferno anniversary happens in this book which is the vampire equivalent of the Holocaust and there is a reenactment. Anita’s necromancer powers are growing stronger and we can see just how much when the council holds the Circus of the Damned and all it’s people hostage. I loved watching Anita discover her newest powers.

is book too. Nathaniel is one of them. Behind Jean-Claude he’s my second favorite character in this series and certainly my favorite shifter. Anita becomes the wereleopard’s leader in this book because she killed their Alpha in The Killing Dance and they have no protection. Asher also comes to town. He was mentioned in the last book for the first time but its here that he makes his initial appearance. Other regular members will appear in future books but almost all of the main ones so far in the series have come on board. The next book up is Blue Moon…

It made me sad and angry. What was really hard was the fact that less than two months ago I'd have agreed with Dolph. You can't trust anyone who sleeps with the monsters. But here I was, doing it. Me, Anita Blake, turned into coffin bait. Sad, very sad.

He rolled onto his back, for all the world like a big pussy cat wanting its belly rubbed. He stretched, straining from toes to finger tips. He laughed and rolled onto his stomach, propped on his elbows. He looked up at me, long, rich brown hair like a curtain across his face. His lilac eyes stared out at me, feral and almost frightening. He lay down in a pool of hair and energy. His gaze stayed on my face, and I realized he was being playful. Not exactly seductive, but playful. It was different and almost more disturbing. Nathaniel managed to be childlike, catlike, and still be an adult. You didn't know whether to pat him on the head, rub his belly, or kiss him. All three seemed to be up for grabs. It was too confusing for me.

First Paragraph: Most people don't stare at the scars. They'll look, of course, then do the eye slide. You know, the quick look, then drop the gaze, then just have to have that second look. But they make it quick. The wounds aren't like freak show bad, but they are interesting. Captain Pete McKinnon, firefighter and arson investigator, sat across from me, big hands wrapped around a glass of iced tea that our secretary, Mary, had brought in for him. He was staring at my arms. Not the place most men look. But it wasn't sexual. He was staring at the scars and didn't seem a bit embarrassed about it.

Picture Explanations
Butterfly: One of the vampires in this book animal to call is the butterfly.
Firefighters: During the Inferno reenactment, there were several vampire resting places hit and Anita is called in to help save the vampires before the floor collapses and the sunlight kills them. She does NOT like the HazMat suits.
Hospital: The wererats run a kind of underground hospital for their wounded who would like to keep their furry identities to themselves. It has been used previous to this book though.
Posted by Ladytink_534 at 7:14 PM