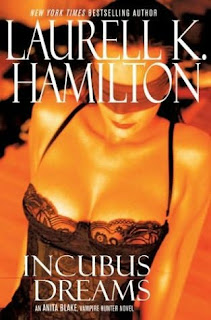 No one is as good at stripping bare the dark desires of the inhuman soul as Laurell K. Hamilton, something she has proven time after time in her New York Times bestselling Anita Blake, Vampire Hunter novels. Now, in Incubus Dreams, Anita’s life is more complicated than ever, caught as she is between her obligations to the living-- and the undead.

As consultant to the Regional Preternatural Crime Investigation Unit, Anita’s called in on what appears to be a case involving a serial killer-- a vampire serial killer-- who may be preying on strippers. She’s sure that none of the local vamps are responsible-- but her judgement may be clouded by a conflict of interest. For she is, after all, the consort of Jean-Claude, the ever-intoxicating Master Vampire of the City-- something that both her human friends and her ex, the alpha werewolf Richard are quick to point out.

Surrounded by suspicion, overwhelmed by her attempts to control the primal lusts that continue to wrack her as a result of her passionate contacts with vampire, werewolf, and shapeshifter Micah, Anita is pushed to her limits-- and beyond…

twelfth book in Laurell K. Hamilton's Anita Blake series Incubus Dreams. Anita accidentally creates her own triumvirate with her (again accidental) vampire servant Damian and her wereleopard Nathaniel which makes them and her other triumvirate with Jean-Claude and Richard even more powerful. Yet because she’s still so new at all of this, everyone is in a whole lot of danger continuously.

story and the police investigation felt like an afterthought to me. Mostly I found Incubus Dreams to be a big emotional, sex-filled mess. While it’s not my favorite book in this series, it’s still an Anita Blake book and some very important things happen during it that are integral to the rest of the series such as the new triumvirate and a couple of new vampire characters: Primo, Byron, Requiem, Wicked and Truth (the last three are the most intriguing).

Anita has mellowed out quite a bit by this book. She even has very casual sex here even if it was an emergency “feeding” for the

ardeur. Nathaniel has always slightly reminded me of Phillip from the first book but besides Jean-Claude, Nathaniel is my favorite male in this series (then Asher, Jason, Micah, Damien, etc… yes, Anita‘s harem isn‘t quite a harem yet since she‘s still weirded out about a bunch of it) and I’m so glad to finally get to this book where he becomes a bit more to Anita than just someone she feels she has to keep and her pomme de sang. This book was a New York Times bestseller for 2004 and a Gaylactic Spectrum Nominee (2005) which "honors outstanding works of science fiction, fantasy and horror which include significant positive explorations of gay, lesbian, bisexual or transgendered characters, themes, or issues."

Because I am a master at screwing up my own love life. If something works too well, I’ve got to poke at it, prod it, until it breaks, or bites me. I was trying not to do that anymore, but old habits, especially bad ones, die hard.

I was supposed to be his master. I was supposed to take care of him, and I hadn’t known. I hadn’t asked, and I’d been so busy trying not to be tied to another man through some weird metaphysical shit, that I hadn’t noticed that Damian’s life sucked.

When he was serious, the nicknames vanished. He’d only been in town a few weeks, and already I knew that when the duckies, luvs, and crumpets disappeared, things were bad.

Sometimes the parts of my life that are weirdest to me aren’t the parts dealing with vampires and werewolves and zombies. Even vampire politics didn’t confuse me as much as my own love life.

There comes a point when you just love someone. Not because they're good, or bad, or anything really. You just love them. It doesn't mean you'll be together forever. It doesn't mean you won't hurt each other. It just mean you love them. Sometimes in spite of who they are, and sometimes because of who they are. And you know that they love you, sometimes because of who you are, and sometimes in spite of it.

First Paragraph: It was an October wedding. The bride was a witch who solved preternatural crimes. The groom raised the dead and slew vampires for a living. It sounded like a Halloween joke, but it wasn't.

Source: From personal collection, bought when published while I was still in high school!

Picture Explanations
Sex: There’s more sex in this book than any other
Stripper: The police investigation in this book is because vampires are killing strippers.
Posted by Ladytink_534 at 11:29 AM

New comments are not allowed.