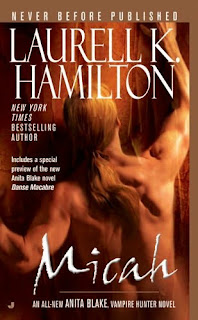 “RAISING THE DEAD WAS EASY; LOVE WAS HARD…”

There are lots of reasons to raise the dead-- some private, some public. In this case, the Feds have a witness who died before he could speak on the record. They want him to be raised so his testimony can be taken. So here I am, on a plane to Philadelphia, flying off to do my job.

But I’m not alone. Micah is with me. Micah, head of the St. Louis wereleopard pard. King to my Queen. The only one of my lovers who can stir my blood with just a glance from his chartreuse cat’s eyes. I was happy to have him at my side.

Until he mentioned that this will be our first time alone together. No master vampires. No alpha werewolf. Just me and Micah. And all my fears and doubts… 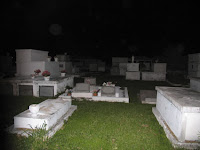 a short, quick read called Micah named after one of Anita’s boyfriends. Micah Callahan was first introduced in Narcissus in Chains but this is the first time some of his background is told even though he‘s Nimir-Raj (King) to her Nimir-Ra (Queen) of the wereleopards. Micah has always been this quiet pillar of support that let’s Anita lead and he follows but this was the first time they get to spend time alone together in the series without all the other guys as distractions. Anita doesn’t go out of town (Bloody Bones, Obsidian Butterfly) too often but when she does it’s always interesting and that’s what happens in Micah. They go to Philadelphia to raise a zombie for a federal case and of course it’s not that cut and dried!

This novella is such a quick read that it felt more like a short story. After the mammoth siz

e of the previous book Incubus Dreams, I can tell why Ms. Hamilton didn’t publish an Anita Blake book in 2005 and why this is so short. It’s no less important though I’m honestly not 100% sure if the character Micah was an essential addition of the series or not. He doesn’t put any pressure on Anita whatsoever which must be relaxing after everything else she puts up with from her harem (sorry, it’s not really a harem and she can’t help it since she needs to feed the ardeur) and he doesn’t need her to take care of him either so technically, he’s the perfect guy for Anita. There is a tiny bit of plot in this book where Anita has to raise a zombie and he’s not particularly happy about it but that was just the reason to get these two out of town together alone.

I raised the dead and was a legal vampire executioner. That's what the police knew for certain. I was a federal marshal because all the vamp executioners who could pass the firearms test had been grandfathered in so that the executioners could both have more powers and be better regulated. Or that was the idea. But I was also the human servant of Jean-Claude, the master vampire of St. Louis. Through ties to Jean-Claude I'd inherited some abilities. One of those abilities was the ardeur. It was as if sex were food, and if I didn't eat enough I got sick.
That wasn't so bad, but I could also hurt anyone that I was metaphysically tied to. Not just hurt, but potentially drain them of life. Or the ardeur could simply choose someone at random to feed from. Which meant the ardeur raised and chose a victim. I didn't always have a lot of choice in who it chose. Ick.

Micah and I looked at each other and had one of those moments. We'd all been living together for about six months. But he and Nathaniel had both moved in at the same time. I'd never dated either of them alone, not really. I mean I'd gone out with them individually, and sex wasn't always a group activity, but the sleeping arrangements were.

Micah had had about the same effect on me from the first moment I'd met him. It had been lust at almost first sight or maybe first touch. I was still a little embarrassed about that. It wasn't like me to fall for someone so quickly, or so hard. I'd really expected it to burn out or for us to have some huge fight and end it, but six months and counting. Six months and no breakup. It was a record for me. I'd dated Jean-Claude for a couple of years, but it had been off again, on again. Most of my relationships were. Micah was the only one who had ever come into my life and managed to stay.

First Paragraph: It was half past dawn when the phone rang. It shattered the first dream of the night into a thousand pieces so that I couldn’t even remember what the dream had been about. I woke gasping and confused, asleep just long enough to feel worse but not rested.

Picture Explanations
Cemetery: Anita is asked to raise a zombie witness and discovers her magic is a little more powerful than usual and wonky too.
Leopard: Micah always has kitty-cat eyes but he’s a black leopard when he shifts.
Posted by Ladytink_534 at 12:38 PM