A New Chapter in Anita’s Life 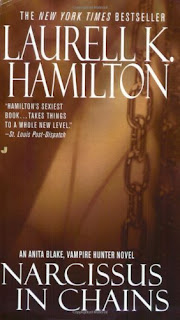 Laurell K. Hamilton, author of the New York Times bestseller A Kiss of Shadows, returns to the series that started it all. Narcissus in Chains, the tenth installment in the ever-popular Anita Blake series, finds everyone's favorite vampire hunter back on her home turf and delving into the heart of human—and non-human—darkness.

Men are men. Jean Claude and Richard are each something else entirely. Anita Blake, Vampire Hunter, torn between them, has been avoiding both vampire and werewolf for months. But when a kidnapper targets innocents she has sworn to protect, Anita turns to them for help, which will require harnessing both their powers—and their hungers...

Six months of celibacy have made Anita crave the two men in her life like never before. But merging their powers together will give this mortal woman a taste of immortal hunger that she’ll never be able to forget.

In Laurell K. Hamilton’s tenth book Nacrissus in Chains, Anita Blake abandons police work completely for the first time. Jean-Claude, Richard, and her have finally completed the last marks that makes them a true triumvirate and they’re powers are growing and spilling over into one another. It is here when Anita contracts the ardeur from Jean-Claude which makes her kind of like a succubus (she literally feeds off of sex). There are also enemies in town that mean to do them harm. United we st 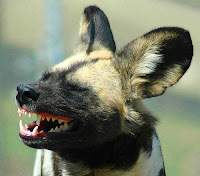 and, divided we fall and the very unique bad guy in this book takes advantage of that.

This was Micah the wereleopard and a Nimir-Raj (rare in the wereleopards) to Anita’s Nimir-Ra first appearance in the series (book number 13 is named after him) and like all of the other important men in Anita‘s life, he too has an interesting introduction. Anita first meets him when she wakes up between him and another wereleopard after being attacked by other shifters. She’s demonstrating all of the signs of being a shapeshifter now and needed their warmth to heal but no one knows if she‘s one or not. He’s also the first (but not the last thanks to Jean-Claude’s secondary power of sex, the arduer) man besides Jean-Claude and Richard (they do break up again in this book) she’s had sex with in this series. Hamilton said she had brought in another man in the series to make Anita’s love life less complicated but only managed to make it more so.

Even more werewolf politics in this one because Richard, their Ulfric (king), has made the pack into a democracy instead of monarchy and though he means well,"You know what they say about good intentions. If he's determined to take himself to hell, fine. But he has no right to drag the rest of [them] along with him." Anita has also shown that while we were away from her 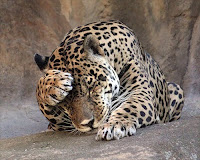 (between books), she’s gotten used to her wereleopard’s touchy-feelie ways and most are staying over at her house and sleeping in the same bed with her often (no, it‘s not sexual in the least). She’s still slightly uncomfortable but no where near as bad as before.

The previous book Obsidian Butterfly was almost like the closing of a chapter on Anita’s life and Narcissus in Chains starts a new one. Anita may be gaining more powers in this one but she’s far from happy about it. In fact, she’s freaked out and world weary. Though this book does start taking a more different tone in the series doesn’t mean I like it any less. True, Anita going from being sexually repressed to what she’s becoming now is interesting to say the least but I don’t see it as inconsistent and I still enjoy this series even if Ms. Hamilton has said that it was on of her most difficult to write.

The last thing on God's green earth that I needed was another man in my life. I didn't have a clue what to do with the two I had already. The fact that they were, respectively, a Master Vampire and an Ulfric, werewolf king, was only part of the problem. That fact alone should let you know just how deep a hole I was digging. Or would that be, already have dug? Yeah, already dug. I was about halfway to China and still throwing dirt up in the air.

I couldn't explain the tears to him, because I didn't want to say it out loud. But I knew. I'd tried not to be one of the monsters for so long, and now, in one fell swoop I was them, both of them. You couldn't be a bloodsucking vampire and be a lycanthrope at the same time. They canceled each other out as a disease or a curse. But I had felt my beast curl around Micah's. I had felt it like an embryo in a safe warm place, waiting. And I had fed off of him as surely as any vampire. I'd always thought I'd have to drink blood to be one of them. But I had been wrong, wrong about so many things. I let Micah hold me. I felt his heart pounding against my back and wept.

I'd been trying not to be a sociopath because it made me a monster. I just hadn't known what I was saying. I needed to feed off humans, lust instead of blood and flesh, but it was still feeding. Being a sociopath was beginning not to sound so bad.

They held me until I fell asleep, exhausted with crying, skin hot. But down in the center of my being was a cold, icy spot that they couldn't touch. It was the place where I loved Richard, had always loved Richard, almost from the first time I'd seen him. But he was right on one thing. We couldn't keep doing this. I wouldn't keep doing this. It was over. It had to be over. He hated what he was, and now he hated what I was. He said he wanted someone that he wouldn't have to worry about hurting, and he did want that, but he also wanted someone human, ordinary. He couldn't have both, but that didn't keep him from wanting both. I couldn't be ordinary, and I wasn't sure I'd ever been human. I couldn't be what Richard wanted me to be, and he couldn't stop wanting it. Richard was a riddle with no answer, and I was tired of playing a game I couldn't win.

I'd fought so long and so hard not to be what I was. Not to be Jean-Claude's human servant, not to be Richard's lupa, not to be anything to anyone. Everyone seemed to be paying the price for that. I hated having other people pay the price for my problems. It was against the rules somehow.

First Paragraph: June had come in like its usual hot, sweaty self, but a freak cold front had moved in during the night and the car radio had been full of the record low temperatures. It was only in the low sixties, not that cold, but after weeks of eighty- and ninety-plus, it felt downright frigid. My best friend Ronnie Sims, and I were sitting in my Jeep with the windows down, letting the unseasonably cool air drift in on us. Ronnie had turned thirty tonight. We were talking about how she felt about the big 3-0 and other girl talk. Considering that she's a private detective and I raise the dead for a living it was pretty ordinary talk. Sex, guys, turning thirty, vampires, werewolves. You know, the usual.

Interviews
All About Romance
Flames Rising
Tales from the Landing

Picture Explanations
Hyena: We meet the werehyenas in this book at the club of their Oba (leader) Narcissus in Chains.
Leopard: Anita is cut up in a fight with shifters when one of her own accidentally damages her. She may just become a real Nimir-ra…
Posted by Ladytink_534 at 11:26 PM