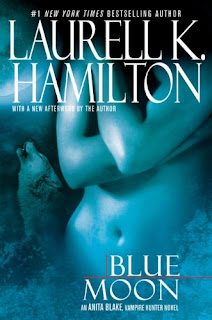 Danger makes the world go 'round in Laurell K. Hamilton's bestselling novels. Just ask Anita Blake, Vampire Hunter. Right now, her problems lie with her ex-fiancé- a werewolf who just got arrested on an assault charge. His guilt or innocence is not the issue. The fact that there's a full moon on the rise is...

"I WONDERED WHAT JEAN-CLAUDE WOULD THINK OF ME DROPPING EVERYTHING TO GO RESCUE RICHARD...
"It didn't really matter. I was going, and that was that. But I did spare a thought for how that might make my vampire lover feel. His heart didn't always beat, but it could still break. That's love. Sometimes it feels good. Sometimes it's just another way to bleed."

Nimir-ra), Anita and them come to an understanding as well. We also see that the munin (kind of like sprits of the werewolf dead) are very much active and the old lupa Raina, whom Anita killed, has taken a very special interest in her. Also, there’s a bit of a side plot which is what got Anita to Tennessee in the first place and that was Richard is in jail for a crime he didn’t commit from dirty cops because the endangered trolls he’s trying to save are on the same land as something someone wants very badly. Werewolves, vampires, wereleopards, there’s even a demon thrown in! Blue Moon is a howling good time.

The painful Richard, Anita, Jean-Claude love triangle is going strong in this book. It hasn’t been pretty ever since Anita started sleeping with Jean-Claude in The Lunatic Cafe. Anita breaks another of her own rules (the first two major ones were no dating vampires and no premarital sex but that went out the window a few books back) in Blue Moon when Richard and her have sex for the first time (even if it starts because of a werewolf ritual). I really didn’t like it

because I’ve never liked Richard (I don’t actively dislike him but he’s my least favorite main character in this series for a variety of reasons). Sex isn’t the only rule she breaks either and though she’s been saying that she’s afraid she’s becoming one of the monsters or a sociopath in previous books several times, it’s this one where she really leans into the abyss but as she says, she’s “a monster, but it’s for a good cause.”

Asher was introduced in the previous book but it’s this one we come to know him. I have a feeling that he’s part of the reason (the other part is her pard of leopards- especially Nathaniel- all shifters are very casual touchy-feely people) that helped Anita not feel as uncomfortable about sex and lust which this series has in abundance. He’s badly scarred on one side from holy water but the other side is sheer perfection, which makes the scarring seem worse, somehow. Everyone has looked at him in disgust for a v 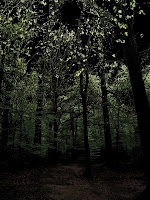 ery long time but Anita doesn’t and she shows him she finds him beautiful though she has no personal relationship with him. Up until Blue Moon, Jason (my favorite werewolf) has been nothing but a pain in the butt from his constant flirting but though glimpses have been shown before, I believe it was in this book that he became a real character to me and not just a flunkie.

I could be mistaken but I believe that Blue Moon was the very first book I read in this series a long time ago (probably 2000? Maybe earlier) and I was so intrigued with it I had to go out and get them all. There’s quite a lot to find interesting in this series but this certainly isn’t my favorite book for various reasons. The only parts I remembered when I re-read it this time were the werewolf parts of the plot, especially Anita’s fights with them and for them. Anita’s power is definitely growing and it’s been a thrill to watch her learn how to control it in this book. Looking forward to re-reading Obsidian Butterfly next.

Oh, hell. Who died and made me den mother? You'd think hanging around with this many preternatural studly guys would mean there was a lot of sex, and sexual tension was in the air a lot, but more than sex, was pain. I don't know if it was because I was a girl, or what, but I ended up doing a hell of a lot more hand-holding than any of the guys. Maybe it was a girl thing. I certainly didn't think of myself as particularly compassionate. So why was it me walking across the floor to the vampire?

For one of the few times on this trip, everyone seemed to be in agreement. I was used to killing vampires, not punishing them, because I'd learned a long time ago that you either killed monsters or left them the fuck alone. Once you pull on their tail, metaphorically speaking, you're just never quite sure how they're going to react. Sorry, cancel that. I knew exactly how Colin would react. The question was how much blood would be spilled and could we possibly pull this off without getting some of our people killed. I didn't give a damn if we killed some of Colin's people, in fact, I was sort of looking forward to it.

I looked from him to the two kneeling wereleopards. I hated putting it into words, but Jason was right. "Nathaniel is mine now. He's on the list of people that I'll protect. He's mine, and no one can hurt him without answering to me. Jason's mine. You're all mine, and no one hurts what's mine. It's not allowed." It sounded so arrogant saying it out loud. It sounded medieval, but it was still true. Some things just are true; you don't have to voice them, they just are. And somewhere along the way, I'd started collecting people. My people. It used to mean friends, but lately, it meant more than that, or less. It meant people like Nathaniel. We certainly weren't friends, but he was mine, just the same.

I felt Jean-Claude like a black hole sucking in all our warmth, all our life. And in that moment, I knew two things. One, that he'd known when Richard and I made love. That he'd felt it. Two, that as he ate from our lives, we ate of his darkness. We drank that still, cold death as surely as he tasted the sun-warmed flesh and pulse of our bodies. And we all drew power from it. The light and the dark. The cold and the hot. Life and death. As the marks drew us closer, the lines between life and death would blur.

First Paragraph: I was dreaming of cool flesh and sheets the color of fresh blood. The phone shattered the dream, leaving only fragments, a glimpse of midnight blue eyes, hands gliding down my body, his hair flung across my face in a sweet, scented cloud. I woke in my own house, miles from Jean-Claude with the feel of his body clinging to me. I fumbled the phone from the bedside table and mumbled, "Hello."

Picture Explanations
Wolves: Anita and Richard are guests of the Tennessee werewolf pack whose Ulfric is named Verne.
Moon: That particular myth about werewolves is true, they do have to change when it’s a full moon but they can shift whenever they like as well.
Jail: Richard is in jail for a crime he didn’t commit
Woods: A good bit of the book takes place in the woods at night. From the lupaner ritual to the end with the bad guys
Posted by Ladytink_534 at 11:46 PM