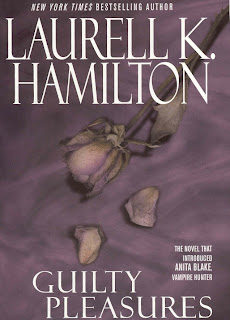 No one knows the dark desires of the soul better than New York Times bestselling author Laurell K. Hamilton. In Guilty Pleasures, she introduces Anita Blake, Vampire Hunter. Anita’s small, dark, and dangerous. But when the city’s most powerful vampire comes to her for help, Anita is faced with her greatest fear-- a man capable of arousing in her a hunger strong enough to match his own…

“WHY SHOULD IT SURPRISE ME THAT I WAS ALIVE?…
There on the right side of my neck was the real thing… Tiny, diminutive, fang marks. Nikolaos [had] contaminated me… I bet she thought I’d be scared of her. She was right on that. But I spend most of my waking hours confronting and destroying things that I fear. A thousand-year-old master vampire was a tall order, but a girl’s got to have a goal.”

Laurell K. Hamilton’s Anita Blake lives in a world where vampirism is legal in the USA,

the dead can be raised (and she’s one of the ones doing the raising), and where “Guilty Pleasures was one of the hottest clubs in the District… [and] the world’s only vampire strip club.” Part mystery, part horror, with no romance to speak of, Guilty Pleasures is the first book in the nineteen books and counting Anita Blake series.

“Most people spend their lives avoiding things they fear. You run after them. That’s crazy,” said a character to Anita when asked why she kills vampires. Blake "raises the dead and [lays]

the undead to rest" she's a vampire that the vampires call the Executioner. The first book of this series is a mystery of who is murdering the local vampires and when Anita refuses to work for the vampires to find out who (she’s already working the case with the local spook squad known as the “Regional Preternatural Investigation Team, R-P-I-T, pronounced rip it [that] handles all supernatural-related crime.”), Nikolaos has one of her flunkies enthrall Anita’s friend Catherine. Nikolaos is the Big Bad’s in this book and she is a 1000-year-old vampire. Whoever said that child vampires are the most vicious most definitely had to be thinking of her. She has a child’s giggle and a lilt reminiscent of Shirley Temple but she has no problem with peeling your mind away “like the layers of an onion.”

Guilty Pleasures isn’t just about the mystery, it’s also an 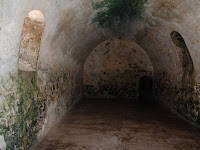 introduction to some amazing characters that will play big parts throughout the entire series. I think it’s interesting that we get to know Anita for two chapters by her personality before there is even a description of what she looks like yet Jean-Claude is described as soon as he appears: A rich, melodious voice floated around us. “Anita, how good of you to come.” The voice belonged to Jean-Claude, club owner and master vampire. He looked like a vampire was supposed to look. Softly curling hair tangled with the high white lace of an antique shirt. Lace spilled over pale, long-fingered hands. The shirt hung open giving a glimpse of lean bare chest framed by more frothy lace. Most men couldn’t have worn a shirt like that.

The vampire made it seem utterly masculine. I’ve always really liked Edward and I believe he’s one of the few characters that haven’t changed very much since the first book. The only Weres in this book are the wererats (who will also make more appearances throughout the series) but there are many, many different kinds in this series.

As many of you have deduced over the years, I really enjoy paranormals (especially books with vampires) and its all thanks to the Anita Blake series. I stumbled across them quite by accident, which led to Charlaine Harris, MaryJanice Davidson, and all the other authors that populate my bookshelves. It’s been awhile since I’ve read anything by LKH so I’ve decided to re-read the series and get caught up with all the new ones I’ve missed lately. You just don’t realize how much this series has changed until you read Guilty Pleasures!

Whatever else you can say about vampires, they are fascinating. It went with the job description, like drinking blood and working nights.

There was a white mass of scars over his left collarbone, ragged and vicious. My stomach tightened. A vampire had torn through his collarbone, ripped at him like a dog with a piece of meat. I knew, because I had a similar scar. I had a lot of similar scars.

This is why I jogged, so I could run like hell when something was chasing me. Thinner thighs was not incentive enough. But this was, running when you had to, running for your life.

First Paragraph: Willie McCoy had been a jerk before he died. His being dead didn’t change that. He sat across from me, wearing a loud plaid sport jacket. The polyester pants were primary Crayola green. His short, black hair was slicked back from a thin, triangular face. He had always reminded me of a bit player in a gangster movie. The kind that sells information, runs errands, and is expendable.

Picture Explanations
Graveyard: Anita is an animator first and foremost, she raises the dead for a living.
Penguin: “I took one more thing to bed with me, a stuffed toy penguin named Sigmund. I don’t sleep with him often, just every once in a while after someone tries to kill me. Everyone has their weaknesses. Some people smoke. I collect stuffed penguins. If you won’t tell, I won’t.”
Dungeon: Nikolaos’ lair is below ground and she locks Anita, Phillip, and several others in the dungeon
Gun: One of Anita’s most used weapons, her 9mm Browning Hi-power
Posted by Ladytink_534 at 2:38 PM