Into the Dark Big Top 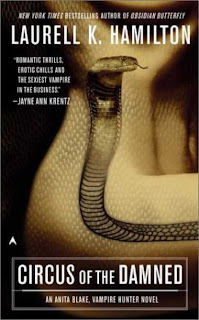 Featuring Anita Blake, Vampire Hunter, the novels of New York Times bestselling author Laurell K. Hamilton introduce readers to a world of supernatural pleasure- and pain. When a powerful, centuries-old vampire hits town, a battle of the undead ensues, with the soul of the city- and Anita's life- at stake...

"SO I WAS AFRAID; SO WHAT?
I had to go, and the sooner I left, the sooner I could come home. If only I believed that Jean-Claude would make things that simple. Nothing was ever simple where he was concerned. If I learned anything about the murders tonight, I'd pay for it, but not in money. Jean-Claude seemed to have plenty of that. No, his coin was more painful, more intimate, more bloody."

dodging people who wanted a piece of her power. In Circus of the Damned; the third book in Laurell K. Hamilton’s series, Anita is investigating murders done by rogue vampires so of course she needs to go see the Vampire Master of City, Jean-Claude. He wants her to be his human servant and he’s not the only one…

Jean-Claude has always been my favorite male in this series so you can imagine my surprise when I learned that he almost was killed off at the end of this story. Ms. Hamilton didn’t plan to have a romance in this series because she “began the series

believing, as Anita did, that the monsters are monstrous, and people are somehow better just because they aren't vampires. It would take us several books to realize that the world was not black and white, but oh, so gray.” Fortunately for all of us this author’s characters have minds of their own. She said, "I've found over the years that if I argue with my characters, it doesn't work," she says. "Early in the book, if I sit there and say, 'No, I don't want that, I've got this plotted out, and I want this to happen,' and I make sure it happens that way, then later on I'll have to go back and rewrite it or throw it out. They're right. The characters know more about their world than I do. They're walking around in it. I'm just following."

It’s so interesting when you re-read a book and re-meet a character that you’ve known for years. Several repeating characters in this series show up during this book including a major one Richard Zeeman. I actually didn’t even recognize him at first! I know he’s important to the series but I’ve always had a problem with him (he‘s my Bill for this series). However, he’s a lot more lighthearted than I remember later on in the series. This is also Larry (Anita’s new apprentice animator) and Stephen’s (a werewolf whose a minor character) first appearance too.

Though different Weres have appeared in this series (wererats were in the first book Guilty Pleasures), Circus of the Damned is where Hamilton really starts to delve into the shifter world. The man-eating cobra was a great scene! Think Jafar transformed in Aladdin then put it in a circus tent. I could have done without the lamia though since that was incredibly creepy. Off to The Lunatic Café!

Zerbrowski and I looked at each other. We started giggling and couldn't stop. I could claim sleep
deprivation. I'd been on my feet for fourteen straight hours, raising the dead and talking to right-wing fruitcakes. The vampire victim was a perfect end to a perfect night. I had a right to be hysterical with laughter. I don't know what Zerbrowski's excuse was.

I had been stabbed, beaten, shot, strangled, and vampire-bit in the space of four months. There comes a point where you just have too many things happening too close together. I had battle fatigue.

Raising the dead makes a lot of people class me with the monsters. There are even days when I agree with them.

First Paragraph: There was dried chicken blood imbedded under my fingernails. When you raise the dead for a living, you have to spill a little blood. It clung in flaking patches to my face and hands. I'd tried to clean the worst of it off before coming to this meeting, but some things only a shower would fix. I sipped coffee from a personalized mug that said, "Piss me off, pay the consequences," and stared at the two men sitting across from me.

Picture Explanations
Circus: Just like Nikolaos, Jean-Claude sleeps under his property Circus of the Damned, which is an indoor circus run by mostly vampires and shifters.
Cobra: A giant cobra goes berserk in the circus. Guess elephants are too tame for vamps…
Cave: Richard and Anita’s first date was supposed to be caving but she accidentally goes without him.
Posted by Ladytink_534 at 11:22 PM