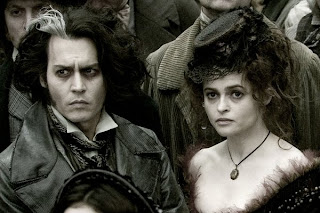 Set in an imaginative world that only Tim Burton and Johnny Depp could capture, Sweeney Todd has been hailed as a masterpiece by critics and audiences everywhere. Supported by a stellar cast including Helena Bonham Carter and Sacha Baron Cohen. Depp's "spellbinding" (NY Magazine) performance as Sweeney brilliantly elevates Burton's dark vision of a wronged man obsessed with revenge. Sweeney Todd is "mighty entertainment" (NY Post) that will win your heart with a vengeance.

around since Victorian times when it was first introduced in a penny dreadful serial and evolved over the years into a popular Broadway musical by Stephen Sondheim, two films, and even a ballet. Using the Sondheim musical as his main inspiration, Tim Burton adapted it into a film starring his two favorite people: actor Johnny Depp, with whom he had worked with in five other films and Helena Bonham-Carter, the mother of his children.

Johnny Depp may not be his usual gorgeous self as Sweeney Todd but he certainly can sing! I’d go as far to say that he can sing almost better than he can act, and that’s really saying something since he is one of my favorite

present-day actors. Surprisingly, he was given the part of Sweeney Todd without anyone (including him) knowing whether or not he could sing while Bonham-Carter had to audition many times before she was given the role of Mrs. Lovett. Actually, everyone in the movie sings at one point. From the odd but not bad-sounding, bad guys Sacha Baron Cohen (who plays Signor Adolfo Pirelli) and Alan Rickman (who plays the hated Judge Turpin) t

I thought the film was a bit odd at first but I quickly began to like it and even if there were some slow and gross parts I didn’t really care for, I knew all the bad reviews I had read simply had to be wrong because to me, Johnny Depp and Tim Burton don’t make bad movies… especially together! True, it’s a strange little m

ovie because it’s most certainly a musical but it’s also a horror movie too. There is still humor, beauty, and with the younger actors- a bit of purity to it, but the movie is most definitely a Burton film and has his signature dark look and feel. Okay, I’ll also concede that it was maybe a bit too gruesome but I’m not sure how much is Burton and how much is trying to be a faithful adaptation of the stage version.

What I am sure about is Mrs. Lovett completely stole the show and one of the best characters I have ever seen Ms. Bonham-Carter play. Sweeney Todd was nominated for, and in some cases, won literally dozens of awards, everything the Oscars (one win, one nomination), the Saturn (two wins, six nominations), and 20 other major awards. This movie is rated R for a very good reason.