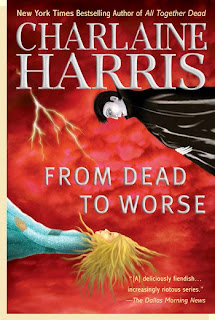 The supernatural community in Bon Temps, Louisiana, is reeling from two hard blows- the supernatural disaster of Hurricane Katrina and the man-made horror of the explosion at the vampire summit the month before in the up-north city of Rhodes. Sookie Stackhouse is safe but dazed, yearning for things to get back to normal. But that’s just not happening. Too many vampires- some friends, some not- were killed or injured, and her weretiger boyfriend, Quinn, is among the missing.

It’s clear that things are changing, whether the Weres and vamps of her corner of Louisiana like it or not. And Sookie -friend of the pack and blood-bonded to Eric Northman, the leader of the local vampire community- is caught up in the changes.

In the ensuing battles, Sookie faces danger, death... and, once more, betrayal by someone she loves. And when the fur has finished flying and the cold blood flowing, her world will be forever altered...

The Southern Vampire Mysteries, an extremely popular paranormal series by author Charlaine Harris, has finally reached the eighth book in what will hopefully be a very long-lasting series.

From Dead to Worse sees Louisiana barmaid, and telepath Sookie Stackhouse a lot less naïve, a lot more interesting, and also, even more popular in both her world and ours.

I discovered Charlaine Harris a couple of years ago and have since then read one of her completed series, and am caught up with the current books released in two others. While the Aurora Teagarden’s and the Harper Connelly books are remarkably good in their own way, no one will ever replace Sookie Stackhouse, my first Harris heroine. Not only is she the most appealing character, she’s also witty and interesting too. Plus, she has really yummy taste in guys!

After discovering how well-loved this heroine and her world is, Alan Ball (Six Feet Under) teamed up with HBO to bring Sookie to the small screen (TV) in True Blood which,

judging by the fact it has already been green-lighted for a second season, seems like a pretty wise decision. It’s starting from the beginning so I’m not sure when or if anything from this book will make it into the adaptation but the war between the werewolves (with Sam and Sookie caught in the crossfire helping) was such a cool battle! What I wouldn’t give to see that filmed, so hopefully True Blood will last awhile. I really hope the few things that annoy me about the show (the main one is that the vampire’s fangs look like toothpicks among other things) either I’ll get used to or will eventually iron themselves out though.

Besides the Were fight, there are a few more skirmishes before the book is over. Oh and Sookie meets a couple of relatives she didn’t know she had too. From Dead to Worse is just as funny as ever and oh, so good! I seriously can’t wait for the next one since although a few problems were cleared up, there are always more that take their places. I saw the dwindling pages and I was so sad that it ended, Charlaine Harris just can’t write fast enough for me.

Southern Vampire Mysteries: Dead Until Dark, Living Dead in Dallas, Club Dead, Dead to the World, Dead as a Doornail, Definitely Dead, All Together Dead, From Dead to Worse

Picture Explanations
Chain: In Sookie's world, vampires and Weres can be subdued completely by silver chains
Lion: Sam is a rare type of shapeshifter and although he prefers the form of a dog, he can shift to just about anything.
Posted by Ladytink_534 at 12:17 AM