She Had a Great Pair of Fins 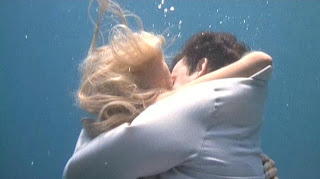 Tom Hanks' stars as Allen Bauer, a workaholic who's convinced he can't fall in love. That is, until he's mysteriously rescued at sea by the mermaid of his dreams! Soon Allen and Madison (Daryl Hannah, Kill Bill) are swept away by hilarious and heartwarming romance. Academy Award winner Ron Howard directs a star studded cast, including Eugene Levy (Bringing Down the House, American Pie) and hilarious John Candy (Home Alone)

he standard Disney bill and Splash was their very first production. Even though it was produced by an unknown label and without “A”-list actors (at the time, of course now Tom Hanks is a much bigger star) it still became a huge success and is considered an iconic part of pop culture today.

Usually I love movies made by Disney (or in this case, the offspring of Disney), animated or otherwise but because I had heard so many things about it over the years I was expecting much more than I received with Splash. Yes it had some funny parts and Darryl Hannah makes a gorgeous mermaid but by the end I was left with a “That’s it?!” feeling. I mean for a movie that was nominated for an Osc

ar and won two other prestigious awards (an NSFC Award & a Saturn Award), I had a right to expect this to be one of the best mermaid films I had ever seen but I guess nothing will ever knock Disney’s animated Little Mermaid out of the top spot. Of course without the success of this film, the world might not have even gotten Ariel.

Ok, I’m being a little harsh. I didn’t hate the movie; I just didn’t really care for it as much as I thought I would. It certainly wasn’t as bad as the TV movie

“sequel” Splash Too (which had only one of the minor characters reprising their role)! Well even I have to admit that all of the actors in the film did a great job and the underwater scenes were really pretty. I think Hannah deserved that Best Actress (Saturn) award based on the fact that she did all of her own “stunts” alone (yes, all of those times she really is under water and isn’t even letting one bubble of air escape). So, I thought it had some funny parts, some beautiful location scenes, and even a few great songs but I still thought it was a little corny and didn’t really withstand the test of time either… but maybe that’s just me.