By the Pricking of My Thumbs… 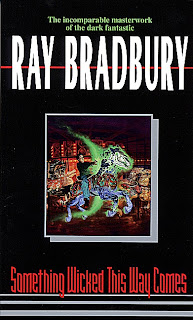 The carnival rolls in sometime after midnight, ushering in Halloween a week early. The shrill siren song of a calliope beckons to all with a seductive promise of dreams and youth regained. In this season of dying, Cooger & Dark's Pandemonium Shadow Show has come to Green Town, Illinois, to destroy every life touched by its strange and sinister mystery. And two boys will discover the secret of its smoke, mazes, and mirrors; two friends will soon know all too well the heavy cost of wishes... and the stuff of nightmare.

Good versus evil, dark versus light are the themes to one of Ray Bradbury’s most popular novels

Something Wicked This Way Comes. A semi-autobiographical story that has places and people that the author knew, and in some cases, Bradbury himself can be seen in the pages. In several interviews, Mr. Bradbury has claimed that he got the idea for this story when he encountered a carnival run by a man named Mr. Electrico who told him to “live forever” and so he became a writer. A man whose writings have influenced many authors today and probably will continue to do so forever.

Fahrenheit 451 was the first time I read anything by this author but it wasn’t until I read The Halloween Tree that I fell in love with the semi-poetic prose combined with his spooky tale. Sure, Fahrenheit was wonderful, better than a lot of books but when it comes to reading something that embraces childhood so fondly but from a slightly different angle than most would view it, Something Wicked This Way Comes is one of the best. I think Stephen King describes this novel best in his nonfiction book D 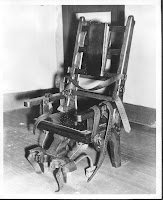 anse Macabre: “a darkly poetic tall tale set in the half-real, half-mythical community of Green Town, Illinois … [for the most part] Bradbury carries his story off with guts and beauty and panache.” (pg, 324)

Originally meant to be a short story entitled Black Ferris, Bradbury developed it into a full-length novel in the hopes that his friend Gene Kelly would direct it. Unfortunately, because of lack of funding that never did happen but there was a Disney movie adaptation made in 1983 with the author himself as the screenwriter. In an interview, he has claimed it was one of the better adaptations out of all his works. This book is dedicated to Gene Kelly.