Can’t Stir a Flower Without Troubling a Star 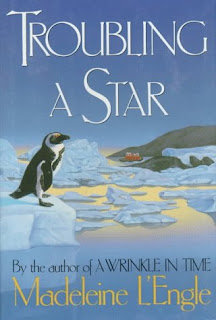 After a year in New York City and a summer with her grandfather, Vicky Austin returns to the rural Connecticut village she grew up in- and feels totally out of place. Her time away, especially her friendship with Adam Eddington, has changed her. Then Adam introduces Vicky to his Great-aunt Serena, who reminds her of her grandfather, and Vicky begins to find a comfortable, if not exciting, routine to her days. When Serena gives her a trip to Antarctica as a birthday present, Vicky can’t believe her luck. Adam will be working at one of the research stations there, following in the footsteps of his uncle, Serena’s son.

But the trip is not what she imagined. As Vicky meets her fellow travelers, it quickly becomes clear that some of them are not what they seem- or they are much more than she knows. She can’t tell whom to trust. To make matters worse, Vicky doesn’t know where she stands with Adam. He’s pulled back, saying they are “just friends.” But weren’t they more than that?

As Vicky becomes caught up in a mystery involving drugs, nuclear waste, and family secrets, she discovers that life- hers included- is as fragile as the ecosystem of Antarctica.

Set mainly in Antarctica a year after the Newbery Honor award winner A Ring of Endless Light, Troubling a Star is the next book in Madeleine L’Engle’s series about the Austin family. It is also her last full-length story featuring the Austin’s (there are two short Christmas books) and it is one of the most suspenseful yet. Although a lot of people and places in this book are fiction, unfortunately the problems in Antarctica are certainly not, which is why L’Engle wrote this book in the first place three years after she visited Antarctica herself.

Instead of dolphins, this time Vicky is able to get up close with all different kinds of penguins in Antarctica where she also stumbles onto something dangerous for a 16 year old girl traveling alone to know. I thought that this story was even better than the last one! Again, the narrator is Vicky and you just know from the very first paragraph that she is well read and incredibly smart beyond her years… not to mention a fantastic poet!

ince I had read one of L’Engle’s books a long time ago and remember really loving it, I knew it was worth reading the series out of order (something I normally wouldn‘t do). After reading Vicky’s story about her time spent on the island where she meets Adam Eddington and the dolphins he’s studying, I had to find out if the relationship between them ever blossomed so I picked up this “sequel”, which although it was published nearly 15 years later, it seems like hardly any time has passed.