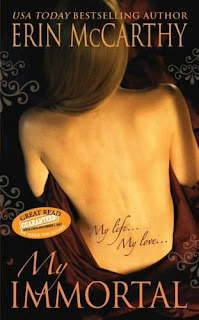 In the late 18th century, a spoiled, selfish plantation owner struck an unholy bargain with a fallen angel: an eternity of servitude for the gift of immortality. For over two hundred years, Damien du Bourg has held up his end of the bargain—by inspiring lust in everyone around him…

Stumbling upon Damien’s plantation on the outskirts of New Orleans while searching for her missing sister, Marley Turner enters a world of shocking decadence. Drawn to the tortured man at the center of it all, Marley feels a powerful sensuality stirring inside her. For the first time, it’s Damien who can’t resist the lure of a woman. But his past sins aren’t ready to be forgotten—or forgiven…

After being nominated for the prestigious RITA award (the equivalent to an Academy Award for romance authors) in 2006, McCarthy decided to “expand her writing” by “experimenting with

more complex stories” and so she created her Seven Deadly Sins paranormal romance series. My Immortal is the very first book in this series and it is about the sin of (what else?) lust.

After enjoying one of the author’s series that are more light-hearted called the Vegas Vampires, I was eager to read more by her. For those of you haven’t tried any of Erin McCarthy’s books I urge you to do so! She has a bit of a Katie MacAlister/ MaryJanice Davidson feel to some of her work. The humor I’ve come to expect from this author is still in Immortal but it’s also a little more subtle and there is less “action”. It does make up for this with ho

w much darker it is.

However, I can’t overly praise the debut book for this series because there were many parts that I didn’t really enjoy. Like the heroine “Miss Fix-it Family-Martyr” Marley who is always looking after her wild little sister, whom I would love to smack upside the head. I mean this selfish, annoying airhead thankfully is only in a few parts but I was more than ready to deal with Marley after her! Marley is certainly the better person in the book even if she is kind of sad and has more than a few flaws but I was rooting for her by the end. 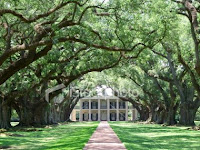 I know that a few people who have tried this story were put off by the hero at first but he gets a lot better over time and the “tortured and complex” hero is certainly not something that is new in romance (especially paranormal romance). I thought that Damien and his whole grey shaded past was fascinating but not nearly as much as the small subplot with the letters of his first wife Marie. I didn’t like her at first either but in the end, she was my favorite character! How strange it would be to become taken away from everything you know just to be dumped in an inhospitable environment. Frankly, I loved the Louisiana setting but I certainly wouldn’t want to live there!

So I have mixed feelings about the book. On one hand, I love the idea of the plot with the Gregori demons (fallen angels) and I’ve already bought the second book Fallen when it came out last June. On the other, I felt like it certainly wasn’t McCarthy’s best work but this was her first shot at a dark paranormal so I’m more than willing to overlook the little things that annoyed me this time.