An Adventure in Egypt 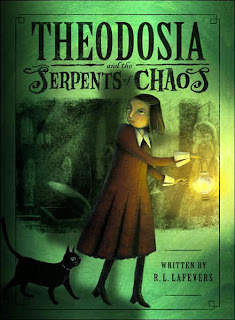 Theodosia Throckmorton has her hands full at the Museum of Legends and Antiquities in London. Her father may be head curator, but it is Theo—and only Theo—who is able to see all the black magic and ancient curses that still cling to the artifacts in the museum.

When Theo’s mother returns from her latest archaeological dig bearing the Heart of Egypt—a legendary amulet belonging to an ancient tomb—Theo learns that it comes inscribed with a curse so black and vile that it threatens to crumble the British Empire from within and start a war too terrible to imagine. Intent on returning the malevolent artifact to its rightful place, Theo devises a daring plan to put things right. But even with the help of her younger brother, a wily street urchin, and the secret society known as the Brotherhood of the Chosen Keepers, it won’t be easy . . . she quickly finds herself pursued down dark alleys, across an ocean, through the bustling crowds of Cairo, and straight into the heart of an ancient mystery. Theo will have to call upon everything she’s ever learned in order to prevent the rising chaos from destroying her country—and herself!

It is England in 1906 and R.L. LaFever’s little heroine Theodosia Throckmorton is as busy as 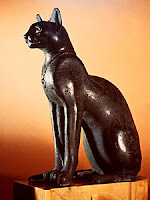 ever taking the Egyptian curses off the artifacts her parents keep lugging home to the Museum of Legends and Antiquities. Taking place partly in England and partly in Egypt itself, Theodosia Throckmorton and the Serpents of Chaos sets the bar very high as the first book in this young adult adventure series.

Nothing has ever been able to capture my attention quicker than a story with mythology in it and my favorites are when the actual Gods and Goddesses are a central part of the story (or even better, a part of the story). Although I have spent much less time reading about the Egyptian gods and goddesses than I have the Greeks and Romans, I was still was able to recognize most of the ones mentioned and enjoyed learning abou 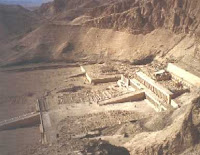 t the ones I didn’t know.

Have you ever read a book intended for young adults and wished that you had read it when you yourself were younger? That was the way I felt when I had finished this story even though I know I couldn’t have enjoyed it any more than I already did! True, Theodosia was a bit bossy and at times bratty but also sly and clever. I sincerely liked her and I couldn’t help but want to meet her adult-self as I couldn’t help but wonder how she would turn out with her talents and with such neglectful parents. Makes me wish the author would write another series of her all grown up, while continuing this one of c

R.L. LaFevers aka Robin Lorraine has been writing most of her life and has published several other young adult novels including another series called the Lowthar's Blade Trilogy. She has recently published the second book in Theo’s series Theodosia and the Staff of Osiris but it is unknown at this point just how many books the series will be (or if it will become a trilogy too). I can’t help but hope that it will last a long time though.

Picture Explanations
Bastat Statue: One of the cursed objects that is sent to the museum.
Valley of the Kings: Theo has to visit the tomb of Thutmose III which is in the valley.
Jam Sandwich: Theo's favorite food.
Posted by Ladytink_534 at 5:05 PM