Some Respect the Badge, Everyone Respects the Gun 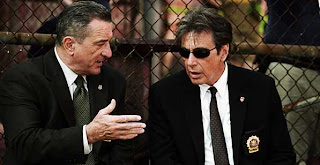 After 30 years as partners in the pressure cooker environment of the NYPD, highly decorated Detectives "Turk", played by Academy Award winner Robert De Niro (Raging Bull) and "Rooster", played by Academy Award winner Al Pacino (Scent of a Woman) should be ready for retirement. But, before they can hang up their badges, they are called in to investigate the murder of a notorious pimp, which appears to have ties to a case they solved years before.

What do two Academy Award winning actors, a rapper, and the voice of Sid from Ice Age have in 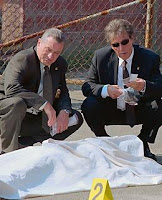 common? The 2008 "cop" movie Righteous Kill that involves all of these people and more. Originally written with just Robert De Niro (Turk) in mind as one of the main characters, it was he that suggested his longtime friend Al Pacino to play his partner Rooster in the film.

Like a lot of people, Robert de Niro and Al Pacino are two of my favorite actors (Pacino slightly more) and even though they're getting a lot older now, both still make such good bad guys. That is what makes a movie like Righteous Kill work so very well. The two actors have worked 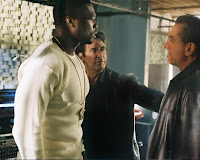 together previously in the 1995 movie Heat but they didn’t have too many scenes together and yet somehow in my mind, they’ve almost always been related. I’ll be the first to admit that it was because of them and not the actual film plot that I decided to actual see it and I was moderately pleased with it… again, mainly thanks to these two iconic actors.

Surprisingly, these two didn’t entirely steal the movie as sev

eral actors in minor parts (such as 50 Cent’s cameo role as Marcus “Spider” Smith) did make an impact too. However, would this movie work without De Niro and Pacino? Yes and no. Yes, because the plot is genuinely interesting but it probably wouldn’t have garnered too much attention without the big star names attached to the project. There have been many mixed reviews by the critics since the film’s release but for the most part the response was lukewarm. In my opinion, this was an okay film, not a great one and it was also easily forgettable.