Solve a Murder with a Ghost 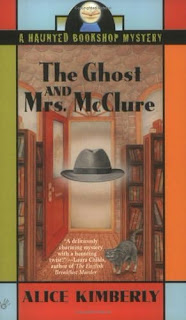 This spirit is willing-- to catch a killer.

Young widow Penelope Thornton-McClure and her old Aunt Sadie are making ends meet by managing a mystery bookshop- a quaint Rhode Island landmark rumored to be haunted. Pen may not believe in ghosts, but she does believe in good publicity—like nabbing Timothy Brennan for a book signing. But soon after the bestselling thriller writer reveals a secret about the store's link to a 1940's murder, he keels over dead- right in the middle of the store's new Community Events space.

Who gives Mrs. McClure the first clue that it was murder? The bookstore's full-time ghost, a PI who was murdered on the very spot more than fifty years before. Is he a figment of Pen's overactive imagination? Or is the oddly likeable fedora-wearing specter the only hope Pen has to solve the crime? You can bet your everlasting life on it...

Kimberly, The Ghost and Mrs. McClure is the first book in their Haunted Bookshop mystery series. Obviously inspired by The Ghost and Mrs. Muir by R.A. Dick (later adapted into a movie and a TV series) as well as those old 1940's detective stories, Mr. and Mrs. "Kimberly" have created a new series that just may outshine their previous collaborations such as the Coffeehouse Mysteries written under the name Cleo Coyle.

Penelope Thornton-McClure (Pen for short), is a great character but what will really draw the readers in is Jack Shepard. He’s interesting and I love learning what he can do as a ghost (not to mention Pen’s ability to speak with the dead, even if she’s just now acknowledging the hidden ability). Another thing that I really liked was how plausible the actual crime solving is. Pen can’t very well go to the cops and tell them a ghost told her that so and so did this or that, so with Jack’s help she figures out the clues and solves the crime. Since Jack can’t leave the bookshop, she’s his eyes, ears, and gams (legs) and he teaches her how to be a detective like he

was back before he got “lead poisoning” (shot).

Of course, I’ve seen old detective TV shows and even some movies but it wasn’t until very recently that I had read my first authentic hard-boiled detective story with Raymond Chandler’s The Lady in the Lake. While very good, you could still tell that Chandler’s book was written during that time period and The Ghost and Mrs. McClure is not (there are flashback scenes that take place in the 1940s but the rest of the book is set in modern day with Jack as a ghost). The language bothered me at f 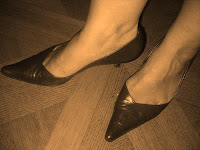 irst because it seemed as if the authors were trying a little too hard to use a lot of slang from that particular decade. It is toned down a little throughout the rest of the book and Pen, being a modern woman helps to balance it out too. This was a great book and I will most definitely be reading the rest of the series soon.

Berkley’s Prime Crime produces some of my favorite cozy mysteries because almost all of them (that I have read at least) not only are fun and creative, but also include a little something extra. For some it’s recipes, but there are many other unique things. For this particular series, its little quotes from detective novels by authors such as Raymond Chandler and Dashiell Hammett as well as books about detective novels (sometimes even just quotes about books in general) are at the beginning of each chapter: