Pretty is as Pretty Does 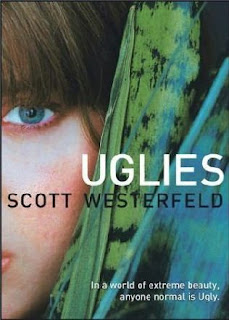 Everybody gets to be supermodel gorgeous. What could be wrong with that?

Tally is about to turn sixteen, and she can’t wait. Not for her license-- for turning pretty. In Tally’s world, your sixteenth birthday brings an operation that turns you from a repellent ugly into a stunningly attractive pretty and catapults you into a high-tech paradise where your only job is to have a really great time. In just a few weeks Tally will be there.

But Tally’s new friend Shay isn’t sure she wants to be pretty. She’d rather risk life of the outside. When Shay runs away, Tally learns about a whole new side of the pretty world-- and it isn’t very pretty. The authorities offer Tally the worst choice she can imagine: find her friend and turn her in, or never turn pretty at all. The choice Tally makes changes her world forever.

Scott Westerfeld has been a young adult science fiction author for the past twelve years however with his 2005 release of Uglies; the first in what was to be a trilogy (it has actually continued 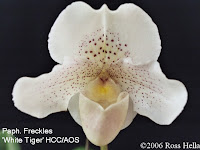 past the three books), he has truly become one of the best authors in the young adult genre. The author‘s note at the beginning states that: “This novel was shaped by a series of e-mail exchanges between myself [Scott Westerfeld] and Ted Chiang about his story "Liking What You See: A Documentary" (His input on the manuscript was also invaluable).”

As a first book in a series, Uglies is a wonderful introduction to Tally Youngblood’s world. The story does have a Fahrenheit 451 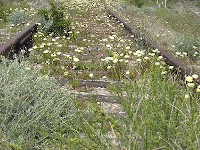 feel to it but like on a bigger scale and with more adventure. Not only is the book entertaining but also it really makes you think and that’s more than wonderful. Especially for a book marketed to young adults and how bad the world has already become. I can see the influence from other stories and movies but what Westerfeld presents really has never been done before to my knowledge.

This was such a wonderful book and that is very high praise coming from me, as I normally tend to avoid science fiction. Westerfeld totally blew me away with his characters and the world he built around them. I was so pleased to hear that the movie rights have been already bought (it’s supposed to be released in 2011) as the story was incredibly vivid and if done properly, I believe it that could be a really 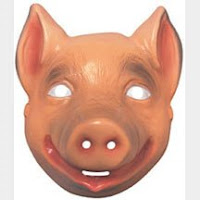 Many books that would usually be released as adult reads are now carrying the genre title of “Young Adult” but many are even better than the books intended for adults so do NOT be put off about the fact that this series is labeled “young adult”. I have read quite a few books in this genre over the past year or so and have discovered that many of the authors didn’t write with a particular age group in mind. There is a bit of teenage romance in Uglies but it works well and it’s not childish or “vulgar” but I still have the feeling that it won’t be too much longer before people start trying to ban these books though.

Picture Explanations
White Tiger Orchid: Used to be rare but a scientist fiddled with its genes and now its the ultimate weed- like the kudzu of today
Track: The Smokies use the abandoned tracks to make the hoverboards fly
Pig Mask: Tally uses one of these to sneak into a Pretty party to find her friend.
Posted by Ladytink_534 at 9:46 PM