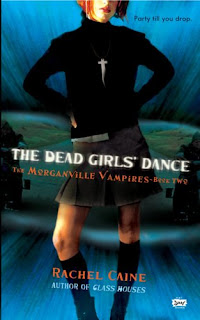 Claire has her share of challenges. Like being a genius in a school that favors beauty over brains; homicidal girls in her dorm, and finding out that her college town is overrun with the living dead. On the up side, she has a new boyfriend with a vampire-hunting dad. But when a local fraternity throws the Dead Girls' Dance, hell is really going to break loose.

After the way the first story in Rachel Caine’s Morganville Vampires series ended the way it did, her new readers could hardly wait until book two, The Dead Girl’s Dance was published.

Continuing seconds after where it left off, the sequel to Glass Houses starts with a bang and never slows down. Biker gangs, evolving relationships, and getting even deeper into the vampire politics are just some of the things that happen throughout the story and some are deadly… 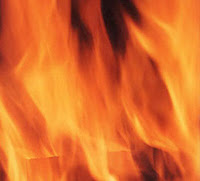 It had been a couple of weeks since I had read the first Morganville Vampires book but I was immediately sucked back in (no pun intended). Claire, Shane, Michael, Eve, they’re all wonderful down-to-earth, interesting characters but their also funny, kind, and in the case of the boys- a little overprotective. Admittedly, sometimes some of the characters didn’t have a whole lot of depth to them and it was a bit more violent than the first book too. I wouldn’t say that this was my favorite in the series overall but it is essential to the storyline.

I have heard that the books have been optioned to be either a movie or a TV series and I’m genuinely hoping on the latter. That way, I can watch these

awesome characters grow and evolve over time instead of just the few hours it takes me to finish one of the books… Like I said, I really like this series so far and I can’t wait to see where Caine takes it next…. Not to mention, what the cliffhanger at the end of this one means for Claire’s future!

There is no way to read these books out of order because for one, it would spoil the entire experience for you and two, it probably wouldn’t make a whole lot of sense. I think that Ms. Caine should consider compiling all of these books into an omnibus after she finishes writing them but until then although they are quite short, I’ll thoroughly enjoy reading each new adventure. 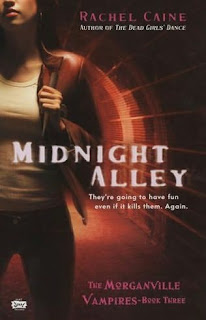 Claire Danvers's college town may be run by vampires but a truce between the living and the dead made things relatively safe. For a while. Now people are turning up dead, a psycho is stalking her, and an ancient bloodsucker has proposed private mentoring. To what end, Claire will find out. And it's giving night school a whole new meaning.

Alley. Again, the reader is dropped right into the story right after where the previous one left off which was with Claire making a very big decision that would affect the rest of her life. Some of her friends are changing too but because of her decision, she should be able to keep them safe…

Vampires. Almost always deadly but endlessly fascinating for me. Ever since I was younger and found myself hooked on Buffy (where I fell head over heels for Spike), I have loved vampires. I’ve come a long way since Buffy/ Angel and Anne Rice’s Lestat but that’s mainly because

vampire fiction has come such a long way too. Many courageous authors have recently expanded the vampire genre even farther by moving it into the young adult fiction where it has been met with both open arms (or necks?) and also unyielding hatred as all the really popular ones soon have parents trying to ban them.

Rachel Caine’s stories aren’t quite popular enough to be censored but this series did manage to stir up enough interest for her original three-book deal to be expanded. The great thing is that even though it’s labeled young adult, a medium sized portion of the readers are actually adults! I can see why, as this series is awesome but as one reviewer put it, "just a few words of advice: when you get to the end, try not to yell at the book out loud." 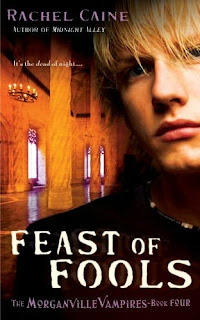 The wait is over. Dig into the feast...

In the town of Morganville, vampires and humans live in relative peace. Student Claire Danvers has never been convinced, though - especially with the arrival of Mr. Bishop, an ancient, old-school vampire who cares nothing about harmony. What he wants from the town's living and its dead is unthinkably sinister. It's only at a formal ball, attended by vampires and their human dates, that Claire realizes the elaborately evil trap he's set for Morganville. 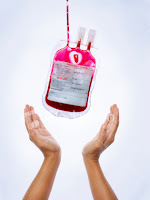 simmering below the surface nor is it yet boiling over in Rachel Caine’s fourth book Feast of Fools. The events that take place in this novel will affect the rest of this series and will feature several new key characters, some good… and some downright evil.

In my opinion, this was the best book from Morganville yet. The readers have gotten to know and love all of the characters so it’s with pleasure and trepidation (it’s a Morganville book so something bad will happen) we watch them go off to try and make nice with the bad guys. This coming-of-age story with tons of supernatural going on has finally started getting more and more dire and the “normal” events like Claire and Shane’s relationship (not to mention Michael and Eve’s) are getting fewer and farther between but that makes that

One of my favorite characters is makes even more appearances than usual throughout Feast of Fools and that is Myrnin the crazy vampire. Claire may be the youngest in the group as always, but she really has grown throughout the books into someone who’s not just book smart anymore. She’s also has more of leader instead of follower role too as she is one of the few people who can get through to the crazy vampire alchemist who is probably the only hope for the vampires’ continued survival. Although these cliffhangers are killing me, I wouldn’t have it any other way and now I can hardly to wait to read the next one!

Picture Explanations
Blood Donations: All the citizens of Morganville are forced to give blood donations for the town's vampires.
Common Grounds: The coffee shop run by Oliver- one of the few neutral grounds where vampires can't hunt.