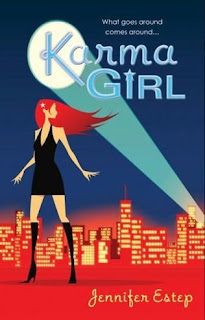 Someone has to pay for what happened to Carmen Cole...

Bigtime, New York, is not big enough for both Carmen Cold and the superheroes and ubervillains who stalk its streets. An intrepid reporter, Carmen's dedicated her life to unmasking the spandex-wearers, all because her fiancé turned out to be a superhero, and a cheating one at that- sleeping with none other than his nubile nemesis.

Exposing the true identities of the nation's caped crusaders and their archenemies has catapulted Carmen from her sleepy southern hometown to the front pages of the country's biggest newspaper, The Expose. Hobnobbing with modelizing millionaires and famished fashionistas is all in a day's work for a woman on the trail of the Fearless Five and the Terrible Triad. But when Carmen gets the scoop of her career, her life comes crashing down around her. And even Bigtime's sexiest superhero, Striker, may not be able to save her...

Having "always loved superheroes" but hated the fact that "the women just never seem to realize their boyfriends are superheroes," Jennifer Estep set out to create a series of books set in the fictional town of Bigtime, New York with larger-than-life superheroes and ubervillains as main 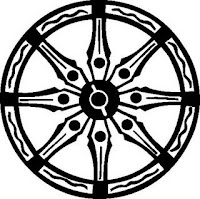 characters. The first book in this series is called Karma Girl and stars a Lois Lane type of reporter who has become quite adept at uncovering the secret identities of the “spandex-wearers” then goes and falls in love with one of them!

Every kid dreams of having superpowers at one time or another (mine was being able to fly, I always knew how to in my dreams but that knowledge left me whenever I woke up- something to do with spinning really fast is all I remember) so I know this book would appeal to a lot of people. Superheroes however, were always something I knew about only vaguely because although I had heard of Batman, Superman, Spiderman, the X-men, etc. I didn’t really know anything about them. Little by little over time, I became curious and then the great, big summer blockbuster movies based on the heroes started being made. Although I never

did become a rabid fan, I also never quite went back to my sheltered existence… I was bit by the superhero bug.

There were a couple of things that irritated me about Karma Girl like how easy it was to guess the secret identities of the superheroes and especially how just about everyone in Ms. Estep’s world had such odd alliterative names (which the author has said she did on purpose as a sort of homage to the comic books that inspired her to write this). In addition, the names played an important part in the reader being laps able to figure out what took the heroine over half the book to do. I would have liked to have been able to put myself more firmly in Carmen’s shoes instead of yelling at her to open her eyes rather than relying on facts while the while the heroine and the Fearless Five blundered around looking for the ubervillains to fall into their laps.

Still, I sincerely loved reading this book with its imaginative characters in this creative world. True, I had figured out all but one twist before part two of the book had even started but the characters and the plot was so cool I couldn’t help but be sucked in. I had never read anything quite like Estep’s story before and I was so glad to learn that there are two more books set in the world of superheroes in Bigtime, New York even if they do feature different heroines (she had originally planned for all of the books to feature Carmen Cole as the main character but an editor suggested that “maybe each book could be about a different superhero” and the author liked that idea even more).

~Note: I won Karma Girl from Carolyn Jean over on The Trillionth Page. Thank you again!


Picture Explanations
Karma Wheel: Carmen is a great believer in Karma and this is one of the symbols of Karma
Brighton’s Best Scotch: Very expensive bottle of scotch that Malefica seems to enjoy
Frost’s Freeze Gun: Like Batman’s nemesis Mr. Freeze, one of the Terrible Triad is called Mr. Frost and he has a freezoray gun too.