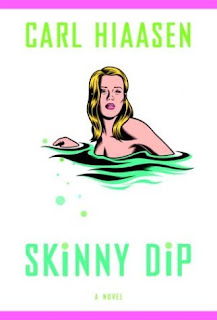 Chaz Perrone might be the only marine scientist in the world who doesn’t know which way the Gulf Stream runs. He might also be the only one who went into biology just to make a killing, and now he’s found a way- doctoring water samples so that a ruthless agribusiness tycoon can continue illegally dumping fertilizer into the endangered Everglades. When Chaz suspects that his wife, Joey, has figured out his scam, he pushes her overboard from a cruise liner into the night-dark Atlantic. Unfortunately for Chaz, his wife doesn’t die in the fall.

Clinging blindly to a bale of Jamaican pot, Joey Perrone is plucked from the ocean by former cop and current loner Mick Stranaham. Instead of rushing to the police and reporting her husband’s crime, Joey decides to stay dead and (with Mick’s help) screw with Chaz until he screws himself.

As Joey haunts and taunts her homicidal husband, as Chaz’s cold-blooded cohorts in pollution grow uneasy about his ineptitude and increasingly erratic behavior, as Mick Stranaham discovers that six failed marriages and years of island solitude haven’t killed the reckless romantic in him, we’re taken on a hilarious, full-throttle, pure Hiaasen ride through the warped politics and mayhem of the human environment and the human heart. 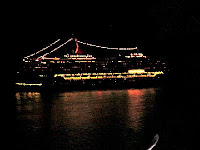 heard about how some people completely vanish off of cruise liners and are never found, he came up with the story Skinny Dip. Hiaasen has written many other satirical crime, fiction/ environmental thrillers over the years, several of which have been made into movies. Director Mike Nichols (The Graduate) has secured the film rights to the book but so far only his books Striptease and Hoot have been adapted. Skinny Dip was nominated for the 2005 Dagger award as well. 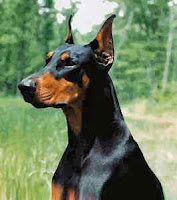 This was my very first Hiaasen book (I have seen one of the movies based on his books though) and I enjoyed the author’s satire and wit throughout the story. It was very interesting and even sometimes thought provoking plus, it’s a crime thriller to be sure but more than anything else, it’s a comedy. Since my first experience with this author was a great one I won’t hesitate to choose another one someday. One of the things that I found most interesting about Carl Hiaasen is that he claims that he takes many real life situations that he discovers in the Florida newspapers (including the one he works a

t) and puts them in his novels- Toole’s drug addiction is one of them.

I really enjoyed the story and the male characters were wonderfully written. It was just Joey, the main character who I felt was kind of flat and one-dimensional but maybe that’s just me. She is one of the only women in the book and I’m not sure but I think the fact that Carl Hiaasen is a man may have played a part in the fact that all of the male characters were more interesting than her. That’s not to say I didn’t like Joey, it’s just that by the end I still felt like I knew everyone else better than her and the story is supposed to be about her and her scheme to get back at her husband for dropping her off the side of a cruise ship. I think this story would have been handled better if a female author like maybe Jennifer Cruise or Mary Kay Andrews had collaborated with him. 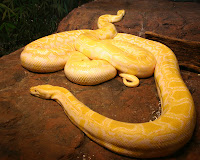 Carl Hiaasen has been an author since 1986 and a journalist even longer than that. He was friends with the late singer/songwriter Warren Zevon- who came up with the title of this book, and even co-wrote a song with Bazza inspired by it called Skinny Dipping. Quite a few of Hiassen’s characters from previous novels do appear in this book but overall this is a story about “a woman who realizes that she's married the ultimate creep, and by God she's going to get some answers,” and maybe a little revenge in the funniest ways possible.

An Evening With Carl Hiaasen:

Picture Explanations
Cruise Ship: Chaz knocks Joey overboard during a cruise
Doberman: Jack's dog Strom
Kayak: What Jack uses to get on and off the island
Albino Pythons: The detective in charge of Joey's case owns two pythons.
Posted by Ladytink_534 at 4:22 PM