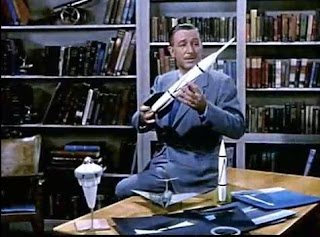 Walt Disney was a true visionary and his most far-reaching vision examined the future. During the 1950s his investigation into space exploration and the wondrous opportunities and challenges of space travel not only came alive in several Disneyland TV shows, but helped create strong public support for The United Stated space program.

Inspiring, educational, and entertaining are the best words to describe Walt Disney's TV show Disneyland (later to be known by several other names). Their first truly educational film was 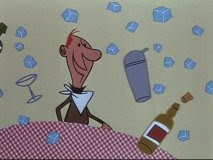 Man in Space which was a kind of documentary about how being in space would effect man with famous scientist guest stars.

One of the original "Nine Old Men" Ward Kimball was the narrator and he was put in charge of all Disney's featurettes about space after this one was not only was nominated for the Academy Award for Best Documentary Short but was also used by the president to show at the Pentagon. A few years later the space race had begun and on July 20, 1969- fourteen years after Man in Space was released, man actually did go to space and land on the moon. 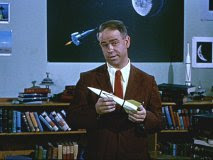 Ward Kimball is one of my very favorite animators (besides Ollie Johnston and Frank Thomas) so it was interesting to see how easily he's able to take on a role that Walt would usually do on the series. Not only does he have a pleasent persona and voice but he seems to be really enjoying himself too. I knew he had an affinity for trains (and actually got Walt interested in them too) but I wasn't aware of the fact of just how much the idea of space travel had touched his, and everyone's lives back then.

Normally something like this documentary would bore me to tears but Disney makes sure that never happens with humourous drawings illustrating what could have easily been a dry lesson. Also it was interesting to see something that we take for granted today was such a major thing back then. Theoretically, I know man has been to space but watching the often dangerous (I can’t help but wonder how many people have died while they were trying to learn what works and what doesn’t) attempts on getting there makes me want to know more.