A Holiday in Crete 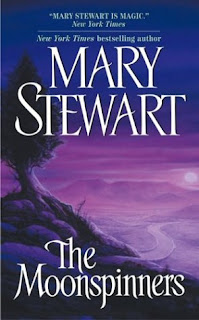 Young, beautiful, and adventurous Nicola Ferris loves her life as a secretary at the British Embassy on the lush island of Crete. Then on her day off, she links up with two hiking companions who have inadvertently stumbled upon a scene of blood vengeance.

And suddenly the life Nicola adores is in danger of coming to an abrupt, brutal, and terrifying end . . .

e years but it was during the 1960’s-1970’s that she was the most popular. Only two of her stories have been adapted for film, Merlin of the Crystal Cave and this book Moonspinners, which Disney adapted two years after it was published to star Hayley Mills. Mary Stewart celebrated her 92 birthday last year.

Having read Mary Stewart's last book Rose Cottage I decided to read one of her most popular books even despite the fact that I didn’t really care for my first Stewart book (although it was good, some parts dragged and it was predictable). I had vague memories of the film version of Moon-Spinners but what really stood out in my mind was how beautiful the Crete setting was which is equally true in the novel- more so actually! I was a little wary 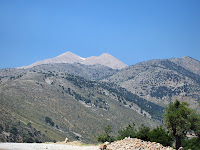 when I started this but as soon as Nicola and I started up the side of The White Mountains I became utterly lost in the author’s wonderful little adventure full of real danger.

By today’s standards, this story would probably be considered a young adult mystery even though the main character Nicola is in her early 20’s. Mainly because there were quite a few times when she acted younger (she even becomes a typical hysterical girl in one part of the book) and because it is tame. That’s not to say tha

t adults today wouldn’t enjoy this because it’s just that good but even with the “adventure” aspect (which is reminiscent of Treasure Island) it takes place in a more innocent time.

This was written as a stand-alone novel but its ending is somewhat open so it could have become a wonderful series, sort of like a grown-up Nancy Drew. Alas, Mary Stewart hasn’t written anything in over 10 years but she does have several other stories that I am now eager to read. If Moon-Spinners is any indication of this author’s talent, then her other books are certainly not to be missed!

Picture Explanations
Church: A real-life place in the book whose setting is pivotal.
White Mountains: When Nicola arrives in Crete she explores here.
Windmill: Excerpt-
This, as luck would have it, was no ugly iron pylon, but a real mill, one of the two corn-mills that served the plateau. It was a solidly-built, conical structure, much like the windmills we know, with a thatched roof, and ten canvas sails. The sails, unlike those of the water-mills, were furled along their spokes, but this idle mill, with its arched doorway and dazzling whitewash, was beautiful.
Posted by Ladytink_534 at 7:43 PM