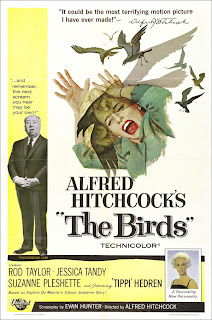 Nothing equals The Birds for sheer terror when Alfred Hitchcock unleashes his foul friends in one of his most shocking and memorable masterpieces. As beautiful blond Melanie Daniels ('Tippi' Hedren) rolls into Bodega Bay in pursuit of eligible bachelor Mitch Brenner (Rod Taylor), she is inexplicably attacked by a seagull. Suddenly thousands of birds are flocking into town, preying on school children and residents in a terrifying series of attacks. Soon Mitch and Melanie are fighting for their lives against a deadly force that can't be explained and can't be stopped in one of Hollywood's most horrific films of nature gone berserk.

Alfred Hitchcock may have passed away nearly 30 years ago but his films and TV show, not to

mention his impact on suspense/ thriller genre may never be forgotten. After Psycho, probably his most well known film was the adaptation of Daphne Du Maurier’s short story The Birds. It was his first film for Universal and it was nominated for the special effects Academy Award that year.

This is a film that is firmly a part of

our pop culture and is even number seven on AFI's 100 Years... 100 Thrills list but somehow I had never seen it before. As much as I have heard of The Birds, I was expecting a great suspense film but I just wasn’t very impressed. Sure, it was creepy and the cast was great but I really hated that they left why the birds attacked unexplained. Hitchcock said, "If you provide an explanation for the phenomenon then the film becomes science fiction; we're not making science fiction,

'Birds' is a thriller, hence we leave out any explanation,"- and he was right, but that didn’t mean that I enjoyed it.

There is no doubt that this is a creepy film as the idea alone of birds attacking for no reason is scary. However, the movie isn't really about the birds, horrifying as their destruction is (and the

special effects are really good for a film nearly 50 years old). It's really about the character's themselves and their interactions with one another but that isn’t what you think of until after the movie is through. Honestly, all I could do was stare at the TV when it ended and say, “That’s it?!” The “open-ended” ending baffled almost everyone at first too but the film still continues to endure.

Jessica Tandy and Tippi Hedren were wonderful in The Birds and although I had some difficulties with the story (I almost believe I would have liked that the original ending more), there is a reason why the movie is still shown in film lectures today. I may not enjoy it and in my unpopular opinion, Hitchcock shouldn't have "cut the first word 'For' and called it simply The Birds" after all but I can't help but appreciate what he accomplished with it.