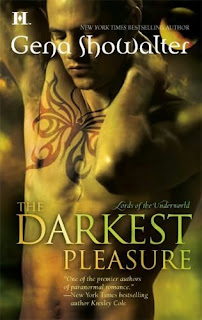 He can bear any pain but the thought of losing her...

Reyes is a man possessed. Bound by the demon of pain, he is forbidden to know pleasure. Yet he craves a mortal woman, Danika Ford, more than breath and will do anything to claim her- even defy the gods.

Danika is on the run. For months she's eluded the Lords of the Underworld, immortal warriors who won't rest until she and her family have been destroyed. But her dreams are haunted by Reyes, the warrior whose searing touch she can't forget. Yet a future together could mean death to all they both hold dear... 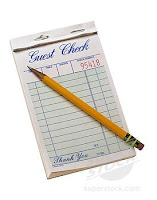 that he has to look forward to until the Titans overthrow the Gods and announce that one of his Brothers must destroy a girl and her family. A girl that he almost instantly falls for in the very first book of Gena Showalter’s Lords of the Underworld series however it isn’t until the third book, The Darkest Pleasure that their story is told. The Lords of the Underworld is Showalter's unique series about a group of "immortal warriors who stole and opened Pandora’s box, allowing the evil demons inside to escape. Now, as punishment, they house those demons within themselves." 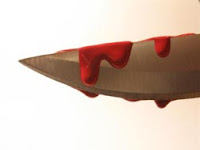 The “keepers” aka the Lords in this series are fantastic, interesting, and yet very flawed- so are their counterparts to a smaller extent. My favorite heroine so far in the series is Lucian’s’ mate Anya (Goddess of Anarchy) from the second story and just from the brief moments that Danika occupied the first two stories I just didn’t really like her. She’s quite a bit more interesting once she stops running from the Lords (or maybe because she ran and had to learn how to toughen up?) though.

Somehow the author walks a fine line between the romance and the subplots without either taking over. That isn’t anywhere near as easy as it sounds as Darkest Pleasure seems to have quite a bit more going on in it: “demons, gods and goddess, curses, battles, a human woman who can see into heaven and hell, and a search for ancient relics” too! As each book in this series builds on the others it is absolutely imperative that they should be read in order.

Picture Explanations
Pencil & Pad: Danika works as a waitress while she's on the run.
Knife: Reyes has to hurt himself (or someone else- so he prefers himself) to keep his demon Pain happy.
Hollywood: The Lords have to rescue Danika from the Hunters here.