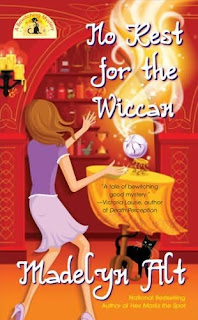 Maggie O'Neill loves her job at Enchantments as much as she loves being Indiana's newest witch. But when her family needs her, she's still willing to lend a hand- even if she has to reach beyond the grave.

It's a long, hot summer in Stony Mill, and Maggie is busy watching TV reruns, minding the store, and figuring out her love life. Then she reluctantly volunteers to care for her bedridden, oh-so-perfect sister, Mel. But Mel isn't the only focus of Maggie's attention. There are some strange sprits hanging around the area- and it looks like a job for Maggie and the N.I.G.H.T.S. ghost-hunting team.

Even as she tries to deal with the long dead, Maggie must also cope with the recently deceased. When a friend of Mel's loses her husband to a dreadful fall, the police call it an accidental death. Maggie's not so sure, and sets her second sights on finding a first-degree murderer...

Empath and now novice witch Maggie O'Neill has a serious ghost and sister problem in No Rest for the Wiccan, not to mention the murder! The current story Madelyn Alt's Bewitching

Mystery series shows no sign of slowing down, and in fact, over the eight months these four books take place, the little town of Stony Mill, Indiana has just gotten a whole lot “livelier.”

Soon after the third book, Hex Marks the Spot came out I discovered Alt’s delightfully magical series and I read them all in one sitting. They were marvelous! The characters were spunky and interesting, and as I noted in my review of the first one, "You just can’t go wrong with witches, ghosts, and antiques in a murder mystery!" The characters have come a long way since The Trouble with Magic, especially the main character Maggie who

has really become a believer over the course of the series. Not only in ghosts but in her own abilities as well. Now if only she’d realize that she belongs with Marcus I’d be completely happy.

There were quite a few things that mad me very angry in this story but not at the author. No, she’s such a good writer that at times I felt like I could see the characters and goodness knows if I could have gotten my hands on that bigoted preacher… well, never mind. I knew from the previous books that I wasn’t crazy about the women in Maggie’s f 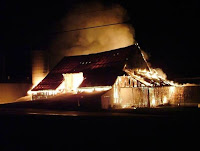 amily either but even with the severe guilt-trips (which gets her into this particular predicament), I had learned to get along her mother, however her sister is a whole ‘nother ballgame! Like I said, there are a couple of people in this story that truly irked me but that’s because they almost feel like real people and not characters.

When asked to describe her series the author said, “The Bewitching Mysteries are a bit of a cross-genre blending of several of my favorite elements: mystery, the paranormal world, speculative elements, mysticism, witchery in various forms, wit, and romance. Not necessarily in that order.” Ms. Alt says that the idea for this story was truly magical as “all of a sudden, a flurry of images and thoughts hit me, and I felt this intense need to write it all down,” which she did and then forgot about it for months until she had another bit of a “brain dump” which resulted in Maggie, Felicity, their little town, and eventually a truly amazing series.

Picture Explanations:
Cat: Maggie finally adopts the cat that has been on all of the covers and names her Minnie, "Minx when we wish to be formal."
Ouija Board: Maggie's sister Melanie decides to try to contact the ghost in her house for fun with some friends. Only to find out that it's not "just a game."
Barn Fire: One of the most action-packed scenes...
Posted by Ladytink_534 at 1:59 AM