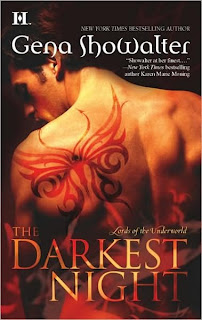 All her life, Ashlyn Darrow has been tormented by voiced from the past. To end the nightmare, she has come to Budapest seeking help from men rumored to have supernatural abilities, not knowing she'll be swept into the arms of Maddox, their most dangerous member-- a man trapped in a hell of his own.

Neither can resist the instant hunger that calms their torments... and ignites an irresistible passion. But every heated touch and burning kiss will edge them closer to destruction- and a soul-shattering test of love...

With her latest series the Lords of the Underworld, author Gena Showalter takes "the myth of

Pandora and her box and completely, well, rewritten it. [She] claims the gods entrusted Pandora, the greatest warrior of her time, to guard the box. But a group of immortal warriors, her peers, fought and won it, opened it, and unleashed the horde of demons locked inside -- demons so vile even hell had been unable to contain them. Because of this, the gods punish each warrior to house a demon inside his own body. So the warriors become the box, so to speak,” and the first “box” that the series focuses on is Maddox, keeper of Violence in The Darkest Night.

After hearing about Gena Showalter's unique series, I knew I had to try it out for myself. From the way I had heard it described it sounded like the author was inspired by J. R. Ward's Black Dagger Brotherhood series (I later discovered

that she is indeed a fan) which I also really enjoy. I have heard that some people consider it a rip-off of Ward’s books but I actually saw very few similarities between them. Also like Ward, Ms. Showalter does have a few subplots going on simultaneously but it doesn't take this author forever to get back to the real story. However, the main thing that does remind me of Ward's series is that the cursed men in both books find their mates, who in this case “tame” them but in this case, the heroine tames the demon that possesses her mate too.

Maddox is a great character and Ashlyn is probably going to be one of my favorite heroines in the series (I think her "gift" is one of the neatest things I've ever heard of- I don't envy her of it though) but I'm very eager to read more of the books in the series. Lucien's (demon is Death, the actual soul-

delivering-to-the-Other-side Grim Reaper) story is next and he falls in love with Anarchy (known as Anya). I'm really looking forward to Torin, Gideon, or Reyes’ getting their own stories soon. I do love that amazingly, the demon-possessed are actually the good guys in these novels and it’s a group of humans hunting them who wreak havoc wherever they go. The mythology in the series is one of the main things that drew me in but it’s the characters that will have me coming back again.

Picture Explanations
Tylenol: Ashlyn gets sick and Maddox has to adjust to the 20th century by learning what Tylenol is.
Cronus: The Titans overthrow the Greeks and begin to take a special interest in the Lords of the Underworld…
Chain: Maddox was the one who killed Pandora so every night he has to be killed and taken to hell, being the keeper of Violence; he needs to be chained during this.
Posted by Ladytink_534 at 3:46 AM