No Case Too Cold for This Ghost 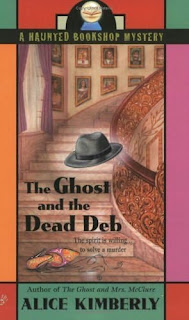 This was the only rule bookshop owner and widow Penelope Thornton-McClure had given her resident ghost, hard-boiled PI Jack Shepard. But when the hot young author Angel Stark arrives at the store to promote her latest, a true crime novel, Jack can hardly contain himself. After all, this is his specialty!

Angel's book is an unsolved mystery about a debutante found strangled to death. And it's filled with juicy details that point a finger at a number of people in the deb's high society circle. But when the author winds up dead too- in precisely the same way- Pen is fast on the case... which means Jack is too. After all, a ghost detective never rests in peace.

name Cleo Coyle teamed up again to start a new series called The Haunted Bookshop Mysteries in 2004. The following year, the married couple published the second book in their new series The Ghost and the Dead Deb.

Even though this series is not as popular as the one written under the name of Cleo Coyle, I have yet to try anything else by these authors. I am impressed that even with two ve

ry different "voices" by two authors; it still blends very well. At first, I didn't really like one of the main characters Penelope Thornton-McClure as I found her quite mousy. She has really surprised me by how much she's grown since the first story.

What keeps bringing me back to the series is that I do like all the minor characters and I'm fascinated by Jack and Pen's relationship. What can I say? The Ghost and Mrs. Muir (starring Rex Harrison and Gene Tierney) is one of my favorite movies and the book it was adapted from gave the authors the idea for the series. Well, half of the idea as it just wouldn’t be the same without the Philippe Marlow/ Sam Spade incarnate Jack Shepherd!

Out of every genre I read, I have a favorite sub-genre and mysteries that is the Cozy. Culinary, chick-lit, historical, pets, suspense, contemporary, and especially hobby cozies are all wonderful ways to spend the day and I enjoy cozy mysteries for other reasons besides the mystery value themselves. Nine times out of ten, especially with cozies from Berkley’s Prime Crime line, I end up learning something I didn't know before (or getting a fabulous new recipe). With the bookshop mysteries I get not only "meet" a cool ghost, I also learn a bit of 1940's gumshoe slang. Actually to be honest, I've read a detective novel written in the time period Jack was from so I know that they don't actually lay it on as thick as the author does (which admittedly can be slightly annoying).

Picture Explanations
Yellow Thread: Murder weapon
Drink Machine: Hugely important clue found under this
Champagne in a Bucket: Jack takes Penelope into his memories again (through her dreams) to discuss a case and they end of drinking together.
Posted by Ladytink_534 at 6:19 AM