Nefertiti: The Perfect One 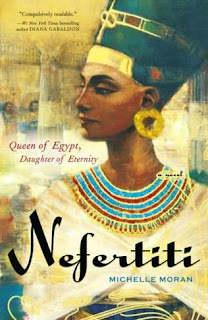 The sweeping story of a powerful Egyptian family, Nefertiti: A Novel tells the tale of two sisters, the first of whom is destined to rule as one of history’s most fascinating queens.

Beautiful Nefertiti and her sister, Mutnodjmet, have been raised far from the court of their aunt, the Queen of Egypt. But when the Pharaoh of Egypt dies, their father’s power play makes Nefertiti wife to the new and impetuous king. It is hoped she will temper King Amunhotep’s desire to overturn Egypt’s religion, but the ambitious Nefertiti encourages Amunhotep’s outrageous plans instead, winning the adoration of the people while making powerful enemies at court. Younger yet more prudent, Mutnodjmet is her sister’s sole confidant, and only she knows to what lengths Nefertiti will go for a child to replace the son of Amunhotep’s first wife.

As King Amunhotep’s commands become more extravagant, he and Nefertiti ostracize the army, clergy, and Egypt’s most powerful allies. Then, when Mutnodjmet begins a dangerous affair with a general, she sees how tenuous her situation is at her own sister’s court. An epic story that resurrects ancient Egypt in vivid detail. 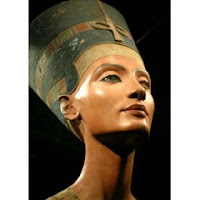 n queen (and has sometimes been debated as being a pharaoh herself) who was married to Amenhotep IV and had six daughters. She wrote this "epic Egyptian tale" after visiting Nefertiti’s famous bust and being captivated by “the graceful curve of Nefertiti’s neck, her arched brows, and the faintest hint of a smile.” She wondered, “Who was this woman, with her self-possessed gaze and stunning features?” So asking herself these questions, she began to research this lady from long ago and in doing so, came up with the outline for this book. 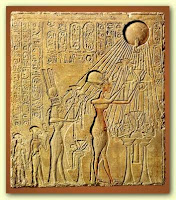 amount of research (this author included), I still find myself wanting to learn more! I have read stories set partly in Egypt before but this was the very first time I had ever read a historical fiction set here. The tone of the story and the way it is told from the minor sister's (Mutnedjmet) point of view, kind of reminds me of The Other Boleyn Girl but the similarities pretty much end there.

There were many terms in the book that I didn't understand and I also had a hard time pronouncing a few of the names (such as the name Ankhkheperura-Neferneferuaten that Nefertiti changed to during her rein) but I truly enjoyed this story, as it was simply

amazing. The author embellishes and changes only what can’t be found in the history books and elsewhere or as to keep from being too confusing to make these characters truly come to life. When she researched the book, she did visit Egypt and read several books about that world, and she even relied on a few of her “contacts in the archaeological world” to recreate the “experience of everyday life and war” that these women had to go through.

There is still a lot of mystery surrounding the real Nefertiti and archaeologists are not even quite sure that they've even discovered her tomb yet. The author did visit one that is supposed to be hers and although it was very expensive, she said it was an experience never to be forgotten. However, Moran really brings this mysterious and iconic lady alive in this story. Often known as "the most beautiful woman in the world" and second only to Cleopatra in terms of celebrity throughout the western world, Nefertiti will not soon be forgotten either and Michelle Moran continues her story with her second novel The Heretic Queen.

Picture Explanations:
The famous bust
Hieroglyphic of Nefertiti worshiping Aten
One of the only remaining statues of Mutnodjmet, Nefertiti's sister.