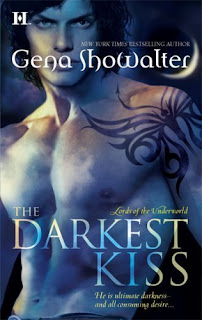 She has tempted many men... but never found her equal until now.

Though she has lived for centuries, Anya, the goddess of anarchy, has never known pleasure. Until Lucian, the incarnation of death-- a warrior eternally doomed to take souls to the hereafter. He draws her like no other. And Anya will risk anything to have him.

But when the merciless Lord of the Underworld is ordered by the gods to claim Anya herself, their uncontrollable attraction becomes an anguished pursuit. Now they must defeat the unconquerable forces that control them, before their thirst for one another demands a sacrifice of love beyond imagining...

Death, anarchy, things that have been around since the dawn of time… or according to Gena Showalter, they are people. One is a being named Lucian that the Gods created to protect them and when he and his fellow guards opened Pandora’s box and let out the demons, they became

the vessels which held them and the other is a Goddess- the Goddess of Anarchy, but she goes by Anya. Their story is told in Showalter’s second book in the Lords of the Underworld series Darkest Kiss.

Again, another satisfying story in the Lords of the Underworld series as Anarchy and Death are a match made in heaven... or somewhere at least. There are other Lords I would have liked to explore better but I did enjoy Lucien's story a lot more than I expected to. Like Malcolm, Flowers' (aka Lucien keeper of the demon Death) mate also accepts and embraces the demon and despite how much I admired Ashlyn, Anya is the best heroine ever! Tough as nails, vulnerable, and still a feisty firecracker too. It also doesn't hurt things that she's genuinely funny too. 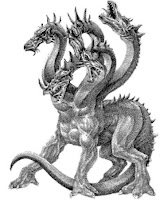 er heroines all be virgins is a little annoying, she at least gives good reasons! Unlike in the first book Darkest Night, where the other side plots didn't bother me at all, I was a little more eager to get back to the main story during Darkest Kiss. Not that I don't like Reyes and Danika (whose story is next) and I'm rooting for Paris to find his own mate one day but I just couldn't wait to find out what Anya and/or Lucien would say/do next!

Gena Showalter plans on continuing this series like J.R. Ward does her Black Dagger Brotherhood books, with each of the “Brothers” or in this case “Lords” finding their own mates in each new book. I know Reyes' (Pain) story is next with Darkest Pleasure and then Sabin's (Doubt) story in The Darkest Whisper but I'm most looking forward to Paris (Promiscuity), Torin (Disease), Strider (Defeat), and maybe Aeron (Wrath) finding their happily-ever-afters soon. Of course, there are actually quite a few more Keepers of the demons from Pandora's box but those are the ones that made a real impression on me.

Picture Explanations
Pink Lollipops: Anya’s favorite candy, one she is hardly ever without
Hydra: The guardian of The Cage of Compulsion
More to come