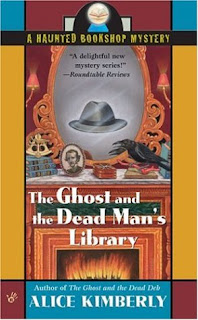 Bookshop owner Penelope Thornton-McClure has just received an extremely rare collection of Edgar Allan Poe's complete works. Rumor has it a secret code, trapped within the books' leather-bound pages, leads to buried treasure. Well, it looks like they got the buried part right, because as Pen sells off the valuable volumes, everyone who buys... dies.

Once these books go missing from their owners' cold hands, Pen will need resident ghost and hard-boiled PI Jack Shepard to help crack the case. The police are skeptical that the deaths involved foul play- so it's up to Pen and Jack to unravel these shocking endings... 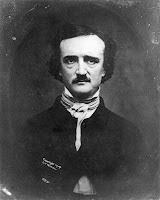 The first two books in the Haunted Bookshop series by husband and wife Marc Cerasini and Alice Alfonsi writing team under the pen name Alice Kimberly had Penelope Thornton-McClure and her resident ghost Jack Shepard PI solving the murders of two very unlikable true crime authors. In the third book The Ghost and the Dead Man's Library, find them trying to solve not only murders but clues left by an author has been dead for over a century and a half.

Edgar Allan Poe is famous now for his poems and stories but everyone knows that he died impoverished right? Well it is also been known that h

e had a “keen interest in the field of cryptography” when he invited people from newspapers and magazines to submit ciphers which he would proceed to solve. He even put them in his story The Gold-Bug which is probably what inspired authors Alice Kimberly to write this story. 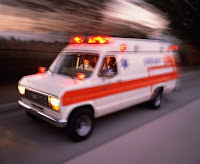 With two solved murders under her belt, amateur sleuth Penelope seems to be getting in more trouble than less in The Ghost and the Dead Man’s Library, even if she now has a way for Jack to come with her when she leaves the shop! Fellow Poe lovers will recognize many references to him and his works throughout the story (especially the gorgeous clock) but be advised as Jack says, “There’s more than one fruitcake in this nut house,” so it gets a little difficult to discover just which fruitcake is the most dangerous!

Picture Explanations
Edgar Allan Poe: The whole book is partly about him and his works
Safety Deposit Box Key: An old case of Jack’s which he solved by finding this key (he can pull Penelope into his memories through her dreams)
Ambulance: Two of the repeat characters in the series are rushed to the hospital in this book.
Posted by Ladytink_534 at 12:30 PM