There are Heroes. There are Superheroes. And Then There's... 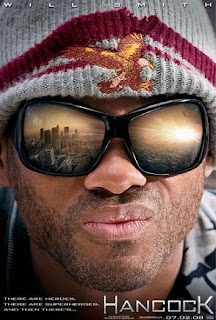 Academy Award nominee Will Smith (Best Actor, The Pursuit of Happyness, 2006) stars in this action-packed comedy as Hancock, a sarcastic, hard-living and misunderstood superhero who has fallen out of favor with the public.

When Hancock grudgingly agrees to an extreme makeover from idealistic publicist Ray Embrey (Jason Bateman, Juno), his life and reputation rise from the ashes and all seems right again - until he meets a woman (2003 Academy Award winner Charlize Theron, Best Actress, Monster) with similar powers to his and the key to his secret past.

A script written by Vincent Ngo titled Tonight, He Comes was

passed around Hollywood film studios for a little over 10 years with various people attached. After a few re-writes and once it was pitched to Will Smith and Columbia Pictures, filming finally began on the script that was later to be known as Hancock. It has been said that the “unlikely (or more accurately unlikable) hero” story came from the writer’s love of Superman and he “wanted to do a version of Superman that was more real and challenging.”

Hancock himself. Will Smith did a really wonderful job in the role even though there were a few parts I didn’t care for but on the whole, I really enjoyed it. I liked it a LOT better than the last Will Smith movie I saw I Am Legend (which frankly was a good movie but those kind of films freak me out a little). The special effects aren’t quite as good as Legend but I enjoyed them regardless. I love Will Smith and I believe he’s one of the best actors today. His drama films are great but I still prefer his action comedies like this one (and Bad Boys, Enemy of the State, etc.) the most. He delivers some of his lines in such a dry way that it makes them hysterically funny.

Superhero films have been taking over the theaters for a couple of years now but none of them are quite like this hero/ anti-hero, he’s more on par with David Rice from Jumper than say Superman or Wolverine (there is a clip soon after the credits start where someone refers to him as this character) but he still has some of their qualities as well. Despite many negative reviews, this film actually did remarkably well at the box office and there have been talks of a sequel. I think it would be a great idea... maybe something along the lines of there being a new being like Hancock. It's been rumored that he's supposed to be Zeus (that is just a theory as Hancock has a thing with eagles, it never says so in the film though) and surely not all of the superheroes have died out!

It has been pointed out that this is almost like two separate films as it starts off "aggressive" but with comedy and ends pretty much as a drama. The genres mesh together quite well though and I'm sure a great deal of the credit for that can go to the crew and the cast as Smith, Charlize Theron, Jason Bateman work really well together. Will Smith even did all his own stunts (which included being hoisted around town bouncing off of buildings in a harness)! His character really "breaks the mould" of a traditional superhero as he's very good at breaking things and he has a bit of attitude... just don't call him an a**-hole! The DVD release includes an unrated version (the original version that was rated R) and the theatrical version. I have seen both but I prefer the latter.